Organizations around the world today are dealing with a dramatic increase in the volume of digital information, and critical infrastructure is not any exception. It’s not only business applications but also communication links and underlying control systems that are susceptible to cyber-attacks. This would also include critical infrastructure such as Energy, Oil & Gas, Banks, Retail, Healthcare, Pharmaceutical, Nuclear, and Natural Resources. Cyber Security is all about identifying critical information assets and protecting them from adversaries, assessing security posture, predicting threat actions, and preparing the ecosystem to handle visible and invisible threats.

Cyber-attacks are an easy weapon for a wide range of adversaries with varied intentions since it is an easy route to covertly capture information and cause damage at specific points of critical infrastructure processes and devices where the true identity of an attacker can still be concealed. Increased level of automation in industrial networks, sophistication of threat matrices, lack of intelligence information about threat patterns, and upcoming threats have made cyber-attacks an organized crime sector with prime focus on economic, environmental and reputational impact.

In this paper, we will focus specifically on the nuances of cyber threats and how Security Analytics & Intelligence can lend industries a better security posture.

We are in an information-based economy where every information asset is valuable for a business process, product and service. Silos of information assets managed by yet another set of silos of systems, applications and products create redundancies and operational nuances and may create pathways for adversaries to enter the business and information ecosystem. Needless to say, this evolution has brought down the concept of air-gap networks, extending seamless operations across boundaries, opening the network for the new possibilities, business expansion and last but not the least, adversaries. Industries are not yet ready with appropriate governance to handle this, struggling to manage silos and trying to handle huge security operational data but not knowing how to utilize this data to obtain a better security posture.

The top three things organizations need to do before focusing on Security Analytics & Intelligence: 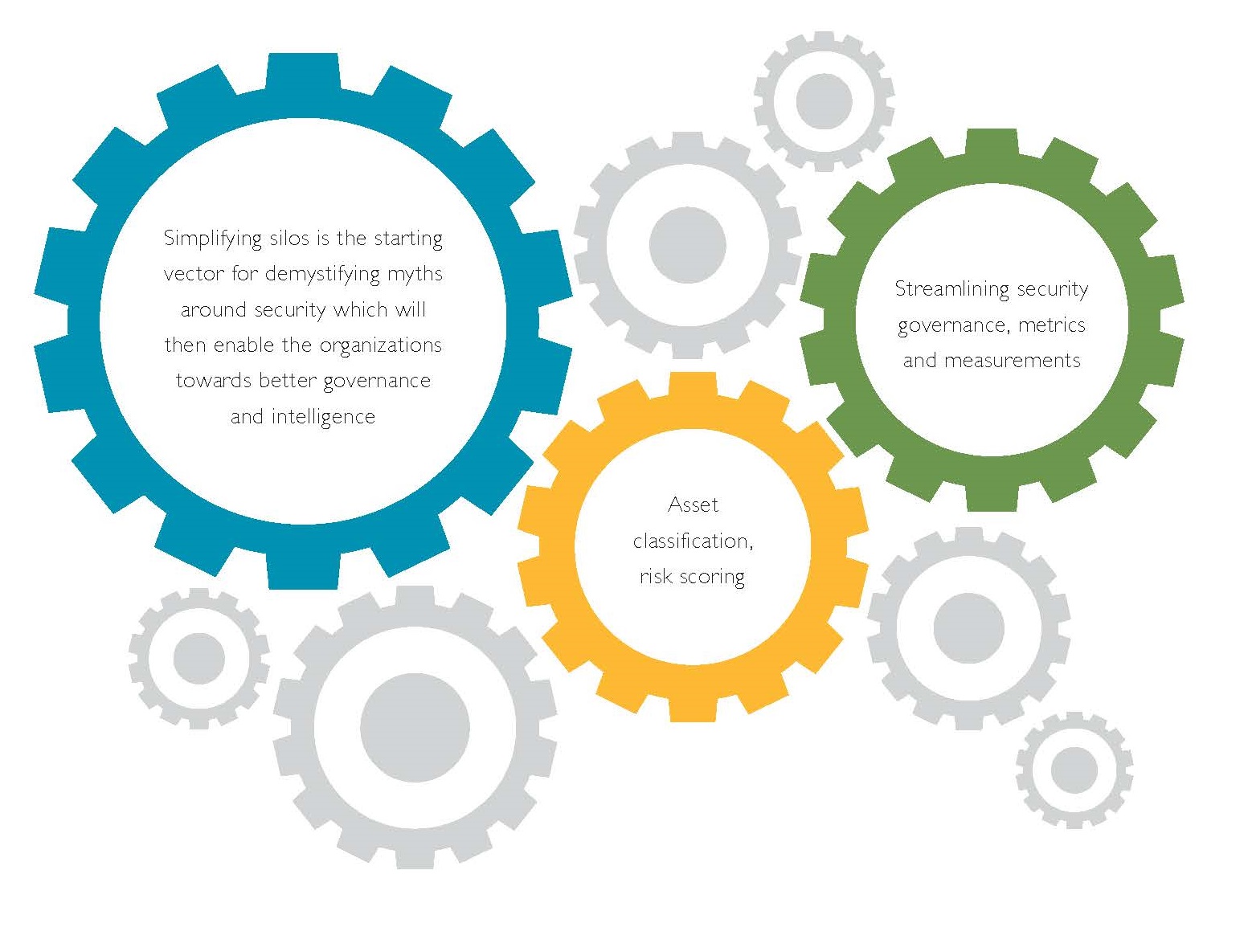 The hyper-connected nature of the digital world is delivering computing that not only creates incredible new opportunities for collaboration and innovation but at the same time, new vulnerabilities that adversaries have learned to exploit. Hyper-connectivity makes the nature of attacks more targeted, sophisticated and capable of being triggered from remote locations with minimal human intervention. It is for these reasons that organizations are considering to deploy a Defense-in-Depth security solution including Security Analytics & Intelligence.

A typical security intelligence platform heavily depends on Social, Mobile and Analytics to create predictive intelligence patterns that help protect information assets. Organizations as well as governments have vast quantities of data that can help detect threats and areas of high risk. However, this can be achieved only if there is a mechanism to collect,aggregate and, most importantly, analyze data from pointsecurity products, network device configurations, servers,network traffic telemetry, applications, end users, and their associated activities.

‘What We Know’ and their associated actions -This involves collecting tons of data from internal and external sources, creating a pattern of threats and vulnerabilities and directing security applications and devices to handle the threats

There are multiple ways of implementing Security Analytics & Intelligence platform in a network:

2.A Unified Approach to Security Analytics

3.A Governance Layer that binds Security Analytics to the business

Security Analytics for ICS/SCADA network can:

Identify who is doing what, when, why and how in your network

Detect abnormalities in the network

Although the above aspects are trivial, it can still bring down an ICS/SCADA network in less than a minute.

1.Create a security monitoring platform to span and correlate events, qualify incidents from L2 to L5 network layers in ICS

By applying the Business Context to threat preparation, security teams will be in a stronger position to confidently allocate resources in a controlled manner in line with the impact values placed on assets that may be simultaneously under attack by multiple yet unrelated threats. Security Analytics includes capturing and analyzing a variety of data such as DNS transactions, emails, documents, social media data, full packet capture data, and business process data; all collected over years of activity. Security Intelligence platforms can provide organizations with vital details of malicious activity present within the organization’s data through comprehensive analysis of structured and unstructured data.

Most enterprises are moving from traditional Data Warehousing Platforms to the Big Data Platform in order to reduce cost of operations, increase the speed of query execution, correlation, and computing.

Big Data technology can be divided into two categories:

This involves analytics applied to data in motion, mostly used for real-time processing. This considers information flow as notifications of events (patterns) that need to be aggregated and combined to produce high-level events.

The Impact of Big Data on the Critical Infrastructure

For instance, in the context of smart meter management, organizations are generally subject to multiple operational triggers (such as triggering of meter disconnect commands). However, there needs to be proper access controls which ensure that these triggers are not directly initiated from the control center, thereby preventing the Meter Data Management logs from failing. This would eliminate the possibility of a DDoS (Distributed Denial of Service) kind of attack. By creating behavioral patterns for control center commands and leveraging machine learning, companies can recognize and prevent such DDoS attempts.

Preventing grid failure due to anomaly requires the integration of a Security Analytics & Intelligence platform with multiple network traffic management systems or data collection points in a control center. The entire setup may take about 3-4 months of time to build a pattern base for anomalies. Inputs considered to build a pattern are typically inputs from the process LAN and Station LAN such as sensor data, IED behavior, commands which trigger overloading of grids, changes in the oscillation of PMU, multiple login attempts, password reset attempts, mismatch of command initiation, time slot for the execution, etc.

By analyzing the converged network traffic in real-time and mapping this to the security pattern base, security analytics can contextualize the patterns based on the rule sets to validate events and incidents, determine threat levels, and create a threat perception. It can also trigger alerts, notification and remediation workflows based on a Set of Procedures (SOP) configured in Security Monitoring or Alert Management systems.

This convergence helps get a unified view of the network thereby enabling more efficient use of Security Analytics & Intelligence to prevent grid failure.

Implementing Security Analytics & Intelligence requires data feeds from all sources, be it security operations, management platforms, control center operations of grids, oscillations from the PMUs, frequency of the wind turbines, inputs from PLC, detecting the changes to the comtrade files, IED configurations, etc. along with the feeds from unstructured data sources for computing and correlation. Though Security Analytics & Intelligence look like essential technology requirements in the context of Critical Infrastructure, the reality is that it is still in the process of embracing this platform by shredding the silos, deploying Defense-in-Depth security solutions, streamlining governance and classifying critical assets. Once these processes are adopted, Security Analytics & Intelligence will play an instrumental role in critical infrastructure protection.