There is an ever-increasing need for businesses to be agile; they should be cost-effective and adapt rapidly to the changes in the environment and customer behavior. This requires an agile and simplified IT infrastructure that can run and change along with the requirement of the industry and customer. IT infrastructure is one of the key enablers to make the business agile. However, if you look at the IT infrastructure of today, which runs many business applications for a service provider or enterprise, it will consist of multiple vendors’ function-specific network devices like router, firewall, load-balancers, etc., in hardware appliance forms. Because of these different network function devices, the organization face many critical challenges from capital expenditures (CAPEX) and operating expenses (OPEX) perspective. 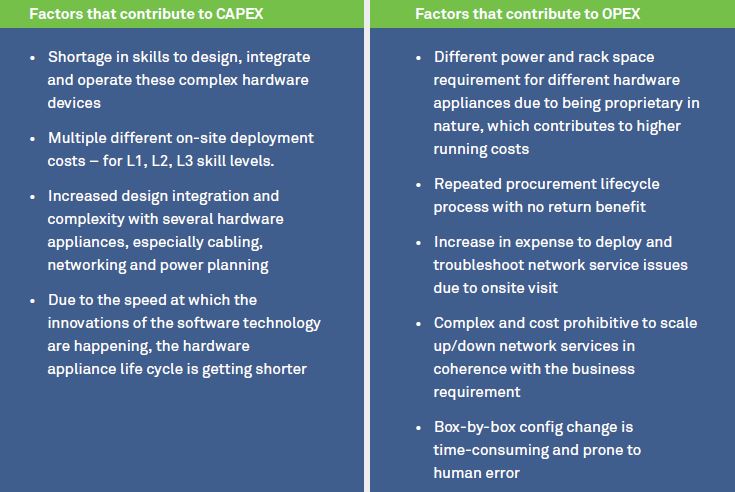 The IT infrastructure components being so unlike and proprietary, requiring different skills for each, and each one with different operational requirements, it has become quite complex for the company to run them on a day-to-day basis. It is being looked upon more as a liability and finally have them outsourced to IT service provider and run them in an OPEX model.

Let’s take a case where a company management decides to change their business, say from being an e-commerce company today and start a data-center business within a time frame of a month or less. How easy it will be for this company to quickly change the current IT infrastructure to able to so it can start service data center business. What would happen to the existing skill the resource is having? Will they undergo re-training? What about the IT components – can they support the new business requirement; will they be decommissioned and replaced before EOL?

Business agility puts an exceedingly strenuous demand on the underlying IT infrastructure when it comes to expansion, mergers, acquisitions, full or partial change in business, etc.

How NFV can benefit enterprise

NFV, Network Function Virtualization, is a concept that addresses the above challenges, by leveraging the virtualization solution, e.g., ESX (from VMware), KVM (kernel-based virtual machine for Linux), to consolidate many network services onto a standard high capacity server, storage, and network switches. These virtualized servers could either be hosted in end-user location, network boundaries or operator’s data centers. NFV transforms the design and operation of the IT networks.

With NFV, the network function is virtualized and is decoupled from the underlying hardware entirely. The underlying common platform is a standard x86 server if, for instance, the server comes to an EOS/EOL, the operator only needs to replace it with an equivalent specification from another vendor. The virtualized network function can then be deployed onto this new standard x86 server with minimal effort.

The other benefit from NFV is that there is no vendor lock-in since VNFs run on any standard x86 server, which can be bought from multiple vendors IBM, Dell, HP, EMC, etc. This significantly reduces the risk related to one vendor when going for their proprietary appliances. 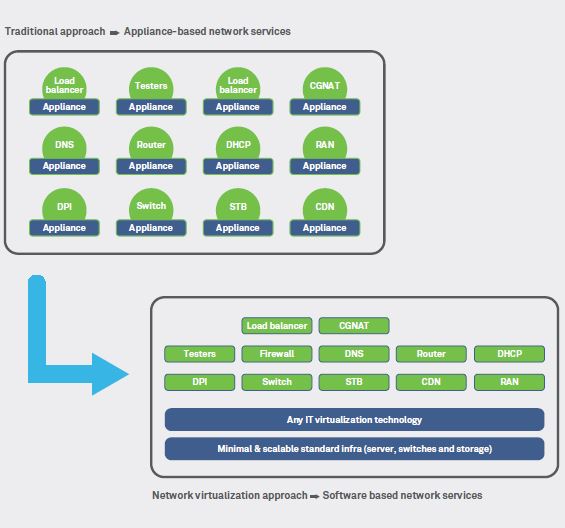 There are numerous benefits that enterprises can gain if they adopt NFV to simplify IT network infrastructure and make it more agile in response to business:

With the network functions now available in virtual form that can run on the standard virtualized host, the initial capital in proprietary appliances for every network function is pointless. Further, cut in the capital is realized, when the redundancy feature is natively and readily available by just providing additional resources, i.e., processing power and memory – from the underlying x86 server.

Since NFV enables managing these network functions centrally, especially deployed with SDN, there is a further reduction in engineers’ time/effort to manage their network by not doing in a device-by-device manner. Further reduction in operational expense is realized because of reduced energy consumption and real-estate hardware footprints.

The software versions of network functions allow improved scalability (scale-in/scale-out), which can follow business traffic demand patterns very closely. NFV enables scale-up (increased throughput or performance) if there is an increase in traffic load and scale it down, once the load surpasses. There is little no impact to performance is nearly stable irrespective of the traffic size.

The provisioning of the network functions has accelerated because there is no need to go through the hardware logistics, no need to plan for power and rack space, no need of mounting and cabling work. The new network function is just another VM that can run on the standard virtualized platform. The entire ordering process time and effort has dramatically been reduced.

Enterprises face steep challenges in counter-attacking the cybercrimes on their network within the data center in east-west traffic. With the virtual forms of the firewall available, these can now be installed inside the hypervisor itself, bringing security nearer to the applications VMs, i.e., micro-segmentation.

Due to NFV, there is no appliance failure concern, which results in improved MTTR (mean-time-to-repair) with little or no impact on the business. With NFV, the VM of the network function can be simply migrated to another common platform, which helps in giving better SLA than with appliance-based network functions.

By using Northbound API, the SDN controllers are now able to make quick changes in the network in response to the applications and to optimize the traffic. Also, this brings in the capacity to leverage the automation techniques by creating templates to create network and applications configuration. This also allows dynamically applying the access lists and deliver QoS on a need basis. 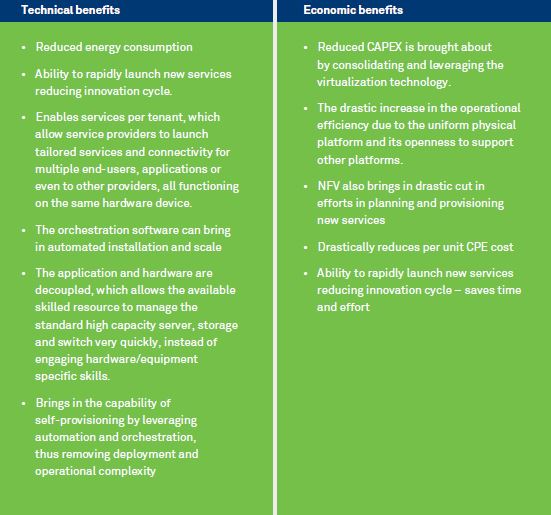 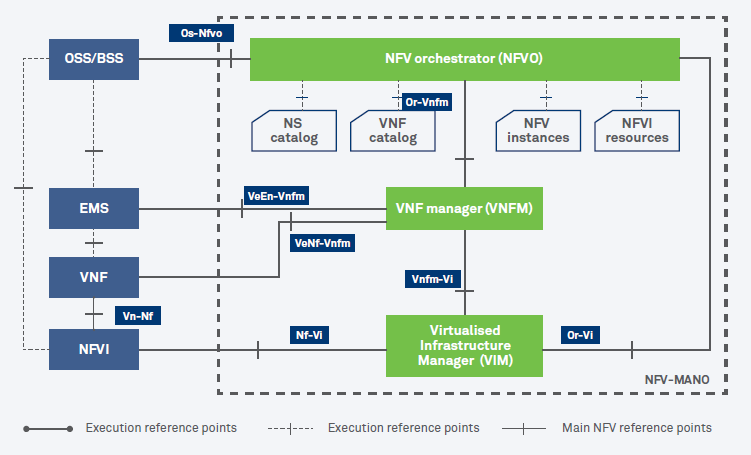 If we were to have this framework from an enterprise point of view, the OSS/BSS would play minimal or no role, because because the pool of resources (compute, network and storage) will be consumed by the enterprise within.

The NFV framework comprises of following main blocks (with a brief explanation): 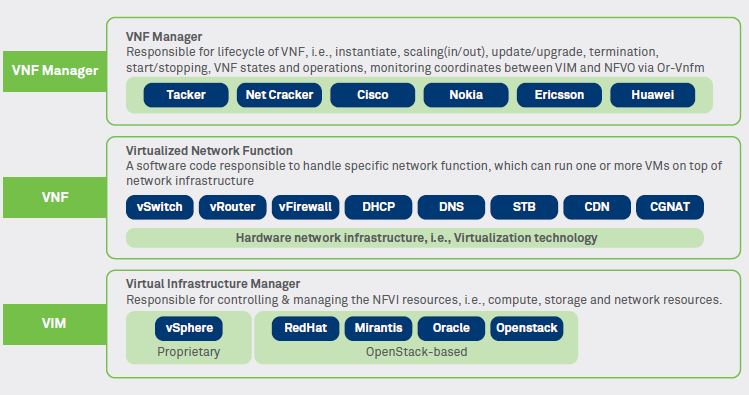 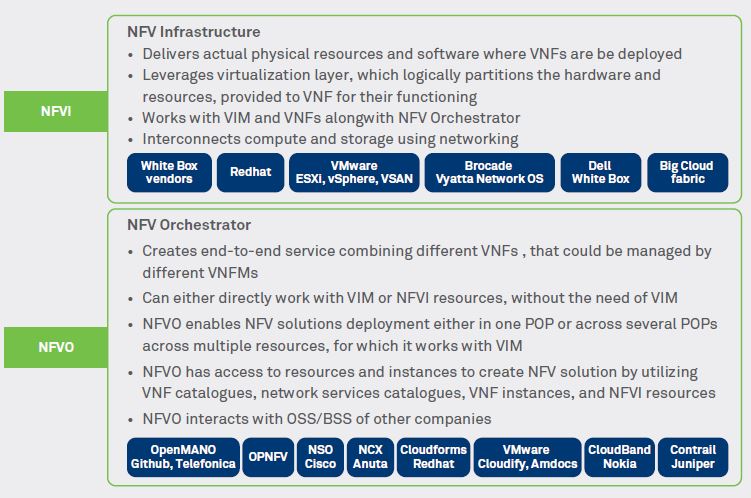 With the need for an agile business, it is a must that today’s enterprise must quickly embark on a journey that will transform their IT infrastructure from today’s disjointed network components to a consolidated one, centrally managed by leveraging the virtualization solutions and hence making it agile IT Infrastructure. The journey is not without challenges, but the economic benefits, one among the many benefits of NFV, outweigh the difficulties and, hence, is of immense value to walk this path. It usually begins with the study of the current state of the infrastructure to identify the network components at a site. Then plan for a Proof of Concept and then full migration in a phased manner.

The integration of various solution components from multiple NFV OEMs, as per the reference architecture, will ensure a simplified, robust, open to further innovation via programming interfaces and a composite NFV solution.

Ravindra K. Botkar, Principal Consultant – GIS SDx Team, Wipro Limited- Ravindra K. Botkar has 15+ years’ experience in N&S, encompassing several project deliveries. He is currently a part of GIS SDx team, as Principal Consultant. He has made key contributions to network automation of legacy and ACI via Python and Ansible, in addition to integration use cases around OpenStack, Cisco and L4-L7 devices. His recent execution of Cisco ACI solution using automation for a bank in APAC has been widely acknowledged by Cisco. His current interests are in DC technologies and Automation. He is currently architecting SDN solutions with specific focus on Open Networking.