Make Infrastructure Programmable to bring Agility in the Datacenter

Agility in the Datacenter

In my previous post, I spoke about how CIOs should transform the underlying elements of datacenters - Infrastructure, Applications, People and Processes - to be able to quickly and confidently face the digital age. In this post, I will deep dive into the infrastructure element in detail and talk about how it can be made programmable to bring in agility in datacenters.

Business @ the Speed of Thought was Bill Gates’ dream in late 90s and is now becoming a reality. More and more startups are threatening well established enterprises because they are more agile and are able to operationalize new ideas faster. Agility and Speed have become a necessity in a highly competitive business environment. Businesses are leveraging technology like never before to try new business ideas, fail fast and recover fast, and expand their product and service offerings at the speed of an idea. Businesses want to stand up systems in minutes or hours than wait for weeks. Developers want to create and manage their own environment. Application release teams want to deploy changes at scale quickly and reliably. Consumers expect features to be added in weeks than wait for "the next version" of the app. So, where do we start building that Agility – Infra, apps, dev practices, IT processes, sourcing practices, business processes? In most cases "Infrastructure" seems to cause the maximum delays. 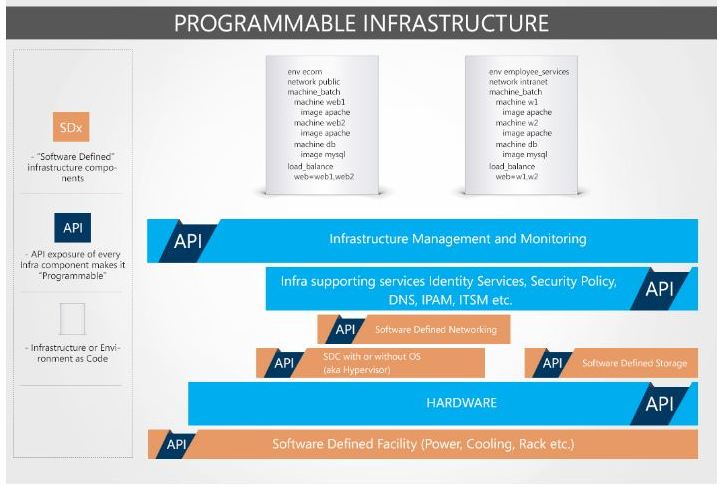 Infrastructure as Code refers to the ability to define a service environment as a code snippet, which can be version controlled with the ability rollback to the earlier versions, ability to clone multiple instances of the environment, automatically update versions of infra and applications. Vagrant, Ansible, Docker, Chef, and Puppet are examples of implementing “Infrastructure as Code”.

The key steps to building an Agile Infrastructure are:

Large organizations which have implemented heterogeneous systems over time find it extremely different to implement this change and make their infrastructure agile. It is because of the complexity of the infrastructure - variety of tools and interfaces, variety of skillsets, variety of processes – which have hardly got an upgrade or optimization for years. Such infrastructure has gotten into a "Technical Debt". Loosening the knots and simplifying it can be a herculean task and expensive. As most industry experts believe, organizations should take a two-way or bimodal approach to this transformation, i.e., while we sustain the operations of the current setup, we should develop a new infrastructure in parallel based on Software Defined Infrastructure principles, make the components programmable and implement templates/recipes for repetitive environment deployments.

Govindaraj Rangan (Govind) is the Head of Datacenter Innovation Office, part of Datacenter Practice at Wipro. He has 19 years of industry experience across the breadth of the technology spectrum - Application Development to IT Operations, UX Design to IT Security Controls, Presales to Implementation, Converged Systems to Internet of Things, and Strategy to Hands-on.

Prior to Wipro, he spent over 10 years at Microsoft as Technology Strategist, working with some of the large Enterprise customers in India. He has also worked in the CIO/CTO organizations of Texas Instruments, Automatic Data Processing, D. E. Shaw & Co. and PCL Mindware.

He has an M.B.A. from ICFAI University specializing in Finance, M.S. in Software Systems from BITS Pilani and B.E. (EEE) from Madras University. Professionally, he is MCSE, CISSP, PMP, ITIL Foundation certified