Internet of Things (IoT) adoption is getting simpler. We see extraordinary instances of IoT across industries, through smart homes, logistics companies using it to ship, distribute and track packages, connected manufacturing plants, security systems, autonomous cars and even pet feeders. One recent significant development was witnessed when the US Air Force had an autonomous F-16 take out targets independentlyi. The F-16 became an unmanned combat vehicle capable of instantaneous decisions, pointing towards a connected future of infinite possibilities. With this avalanche of opportunities, a growing number of edge devices – such as defense, agricultural, oil and gas, safety, manufacturing and transportation equipment – are expected to usher in automation for quick and effective decisions similar to the F16. This is where the challenges lie and where IoT could possibly have a hiccup.

In the current scenario, sensors at the edge monitor the environment/equipment, record parameters, stream the data into cloud storage systems at the backend, remotely analyze the data and send back information to humans or machines for action at source (see Figure 1). The approach has worked fine so far. However, traditional IoT systems comprise edge components with very little compute capability. These components were meant to gather data. Since logic and decision-making are maintained at the backend, it makes a system dependent on the backend while adding latency to the decision-making.

The new demand is to reduce latency and take decisions at the edge itself, closest to real-time. This means adding storage and compute resources at the edge. 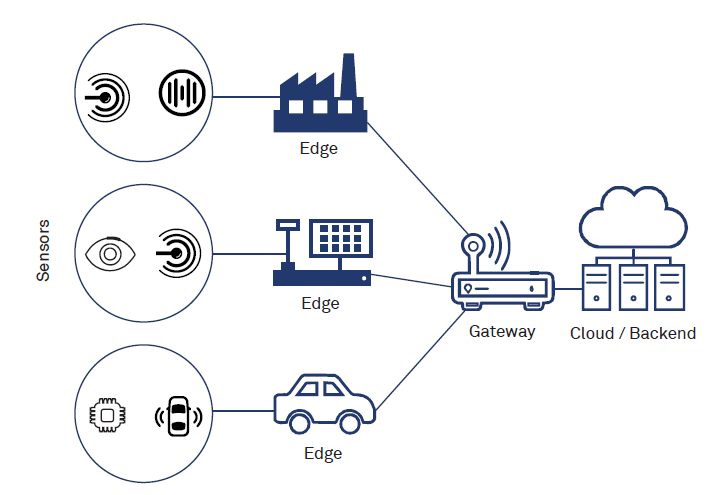 According to forecasts, there will be close to 21 billion edge devices by 2020ii. As this projec-tion becomes reality, it is likely that the underlying networks transporting the data will run into bandwidth congestion. In such an environment, dependency on cloud to take action could result in lags and failures, thereby seriously jeopardizing operations of critical systems such as in utilities, power plants, railway systems, mining operations and surveillance systems, which are more and more reliant on IoT and cloud technologies.

The choice of the level of intelligence at the edge is only restricted by our insecurity to rely on a system to take actions. A well-built system will take any action it is designed to take. Caution is imperative, however, it should not hold us back from building increasingly autonomous systems.

The solution is two fold:

Why this has not happened yet is not too difficult to predict. Cloud has become a cost-effective and natural storage medium over time. Moreover, it is in the interest of cloud providers to encourage publishing data at the backend. This ensures their systems are used to complete analytics and decision-making. But as edge devices grow, the structure will be crippled by its own weight.

In case of the first solution, creating data filters can improve the performance of edge devices significantly. Assume a sensor monitoring ambient temperature and publishing data every 30 seconds on to the backend for analysis and action (for instance, if temperature is > 300C, switch on the fan). When the temperature increases, the backend provides appropriate action. However, in most situations, the temperature may not change for hours, even days. There is no real reason for the edge device to publish data every 30 seconds on to the backend. In such cases, the edge device can store the data and batch-publish when convenient. The edge device must also be armed with a degree of intelligence. This means that if the temperature varies, it can do one of two things: either send the data immediately to a remote backend for analysis or to take decision locally to produce instantaneous action.

The second solution is especially efficient and useful in situations where a lag in decision-making can lead to disaster – such as during a gas leak in a mining operation or a potentially dangerous traffic situation for an autonomous car. Further, edge devices must be smart enough to separate valuable data from noise. An incorrect value propagating through the system may create false alerts and cause havoc. Multiple gates are required to be built in the system to avoid such occurrences. Techniques such as FFT, ANR, LQE, Bandpass Filters and Nonlinear filters can be used in addition to physical devices like attenuators to that effect.

As a first step, embedding intelligence in edge devices need not mean sophisticated systems. Intelligence, to begin with, can be made up of simple low compute rules and algorithms. They come with an added advantage of low storage and low energy usage.

At the next design level, device-to-device (D2D) communication and the use of better decision-making tools like edge analytics, fog computing and neural nets can be considered. In this structure, sensors in a distributed environment are clustered to be able to work in collaboration with each other. These clusters handle multiple aspects of an IoT environment, such as power supply, monitor parameters, regulate inputs, minimize waste, etc. (see Figure 2) These devices also have larger storage and compute capacity. They eliminate the need for a back end/cloud interface and work independent of each other in case of failures.

Giants such as Google, Apple and Intel have invested in technologies that enhance edge capabilitiesiii. The reasons are self-evident – safety, speed and reliability of decision-making.

It is imperative for organizations to change their approach towards building such intelligent IoT systems or risk losing out.

[3] As an example, Intel recently acquired Mobileye, a leading automotive supplier of sensor systems that help prevent collisions, for US$15 Billion

In a career spanning 15 years, Kuljeet Singh has worked extensively in the Mobility and Embedded Systems domains. Currently a Project Manager with Wipro’s EngineeringNXT Services, he has wide industry experience and is working with the R&D team of a leading semiconductor customer building the next-generation of IoT solutions. For more information, please reach out to Kuljeet at kuljeet.singh@wipro.com