How a leading multinational

created a one of its kind APaaS

The client achieved an efficiency gain of over 45% along with zero processing error through Wipro’s Automation Platform as-a- Service (APaaS). 53 bots were deployed to automate twenty processes, saving more than 7000 hours.

Automation services in the client ecosystem were fragmented with lack of robust governance structure and proper assessment guidelines. The client’s concerns were around process compliance, IP ownership of the automation assets and transparency of the automation maturity across internal and external operation units. A decentralized and isolated approach led to conflicts in automation adoption, preventing the client to scale automation at an enterprise scale. This coupled with inefficient communication, project benchmarking and segregation of ownership was inhibiting the customer from deriving maximum benefits from their automation investments. It eventually impacted revenue growth as a result of high costs involved in managing such processes.

For example, in a process where previously insured customers were to be won back, we handled volumes of over 100,000 quotes in 7 months and each quote had an AHT of 1.5 – 2 minutes. Input files were received via FTP and email and the rational robot was triggered manually.

Wipro helped the client create APaaS in eight weeks. The service covers a central governance framework, end-to-end change management methodology and automation of in-house & outsourced processes. Wipro setup infrastructure for UiPath across multiple countries where the client operates, which is only the 3rd such deployment in UiPath across the globe. Wipro automated over 20 processes for the client.

Deploying this automation platform as a service enabled the client to create a central robust governance framework which ensured delivery of maximum benefits out of the investments made by the client. It also increased organizational efficiency as a whole along with the following tangible benefits: 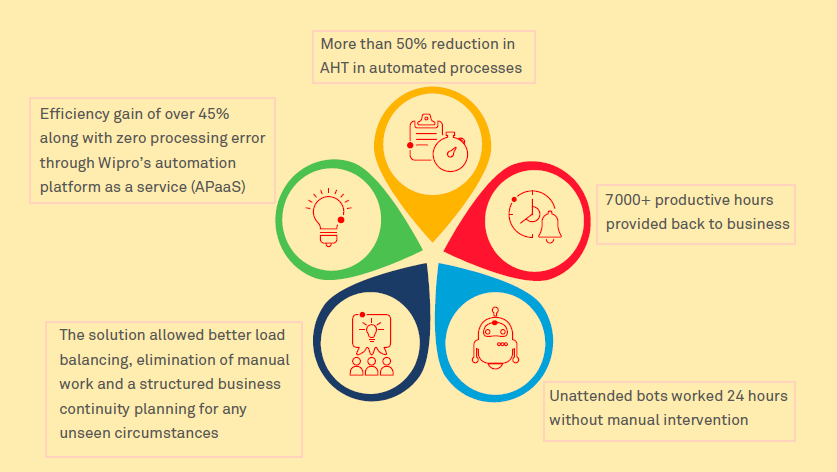 "Using Wipro’s APaaS model where both in-house and outsourced processes are automated, the client achieved more than 50% reduction in handling time. With rapid upscale and downscale abilities, multi country operations, and the ability to upscale to AI, the ApaaS story is truly a one of its kind in the market."

Getting it Right the First Time