Most businesses are at the cusp of a digital transformation that will lead to a complete remaking of their operations. This process is likely to be even more transformative than that of the previous rounds of industrialization. I believe, digitalization is a kind of continuous revolution, not a once-and-done event. Companies not only need to think about incorporating the latest technology into their business but reengineer their entire process of innovation. In earlier times, winners tended to be those who mastered a given technology, tool or process. Tomorrow’s winners will be those who understand innovation and have integrated the ability to change into their culture and processes.

In other words, innovation is becoming a new core competency.

How do you develop this capability? First, you need to understand the nature of your goal. Innovation is often divided into three major categories: incremental, disruptive, or radical.

Incremental innovation is the lowest-risk variety, those minor upgrades that add up over time to substantial gains, the research equivalent of the regular dividend.

For an existing industry, disruptive innovation is something that happens to market participants, a cataclysmic new source of competition shows up, that over time leads to the remaking of an entire industry.

Radical innovation, on the other hand, begins with the invention and then works backward toward the market. Consider, for example, the flying driverless electric aircraft that Lilium and a number of other startups are now building that may transform existing value chains, make some irrelevant and build new ones that don’t exist. Smart phones rendered the entire GPS industry, and a large part of the amateur photography industry irrelevant and created new ones like digital banking and Realtime Asset Sharing, like Uber.

Their review of over 1000 research articles on innovation published over the past 40 years suggests that faced with the threat of disruptive innovation, a company’s best bet is to respond with a new business unit or a new business model that can face that threat head-on. On the other hand, radical innovation means you need the capacity to incorporate a big new idea very quickly, often by hiring imaginative employees to form an ‘anti-company’ of sorts within the firm.

It’s an insightful analysis, but one that stops short of recognizing just how much innovation is changing the nature of competition. Today, the possibilities with Big Data, artificial intelligence, and cloud computing mean that very few sources of competitive advantage can last for any appreciable length of time. The boundaries of the organization itself are now far less fixed than they once were, as global broadband, mobile communication networks, and computational power on tap makes it ever easier to collaborate with customers and suppliers.

For most of the 20th century and even into the 2000s, businesses talked about competitive advantage in terms that were vaguely military and even slightly medieval -- lots of walls, moats, and even the occasional catapult.

That may not be over now, but it’s definitely on its way out.

As business leaders, we not only need innovation, we need an innovation strategy and process. In much the same way that we have always had a financial strategy and an M&A strategy, we now need to consider our innovation portfolio, keeping a close eye on developments across industries, technological advancements that could be applied to our industry, and research that could yield transformative gains for our businesses.

For some companies, this will mean focusing the bulk of their efforts on incremental advances. Others will need to make bigger bets, much as a portfolio investor might keep most of his assets in blue chip stocks but keep significant holdings on more speculative opportunities.

The digital era demands institutionalizing a new way of strategic thinking and operating that requires creative, improvisational thinking, one that is always willing to reimagine the nature of the firm’s value proposition and the value chain that delivers it, and is always open to new partners, new markets, and new product possibilities. 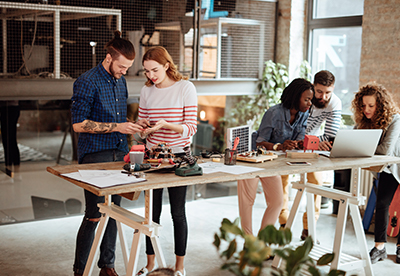 Are Australian firms making a mistake with RPA?

In 2018, Gartner reported that Australia’s Robotic Process Automation (RPA) industry had registered ~2x growth over the previous year, seeing a 48 per cent rise in total revenues.

Part 3: What Are the Architectural Aspects of Edge Devices Needed for Deep Learning?

The 3 pillars of Enterprise Architecture are Alignment, Insight and Quality.