My previous post, An Alternative Approach to DevOps Deployment , details my personal experience using Ansible and its advantages over other tools. In this article, I will give an overview of how to create an Ansible project and application deployment mechanism using Go Pipeline.

Basic Structure of an Ansible Project

As part of the deployment script, we must define the Ansible structure first. In the structure, we need to define staging, production, group_vars, host_vars and roles:

Finally, we need to define a wrapper Ansible playbook to execute the roles. Under one wrapper playbook, the number of roles that will execute depends on developer needs or the project requirements. In the following subsections, I will explain each and every component of an Ansible project (Figure 1). 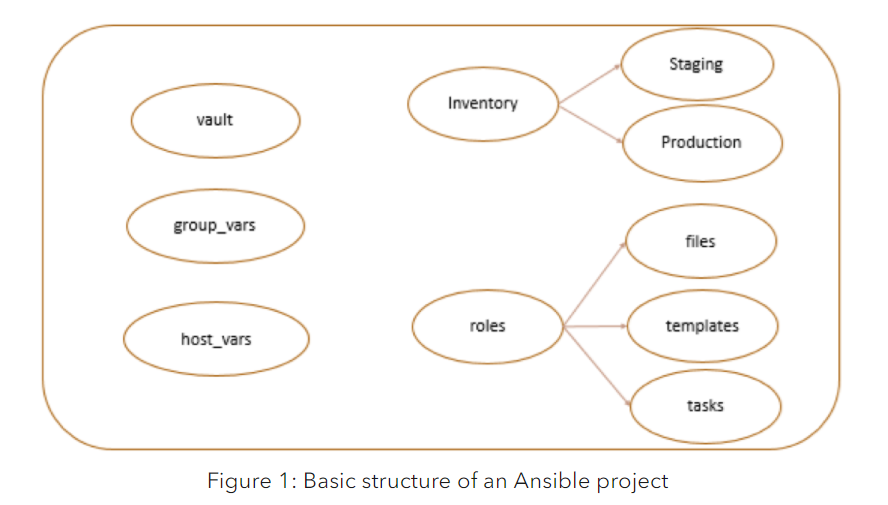 Group variables contain all environmental variables as well as common variables. This is the place where we can store all template variables for each environment. While running an Ansible playbook, we will specify a limit, and based on that, Ansible will use the appropriate group variables.

Vault is a password-protected file where deployment engineers store all clear text passwords. Vault has the capability to use its own encryption to protect our passwords. These passwords might include a deployment user password, service account password, database password, and a web service password. We can use ansible-vault create or edit for creating and modifying a vault respectively.

The application deployment process always follows a set of sequential instructions. In Ansible, each instruction has been defined under a role by the software engineers. Each role consists of three components: tasks, templates and files.

Any type of file used by a task is kept under that task role directory. It may be any executable like .sh, .exe, .dat or a simple .txt file. An example of the basic structure of an Ansible project is illustrated in Figure 2: 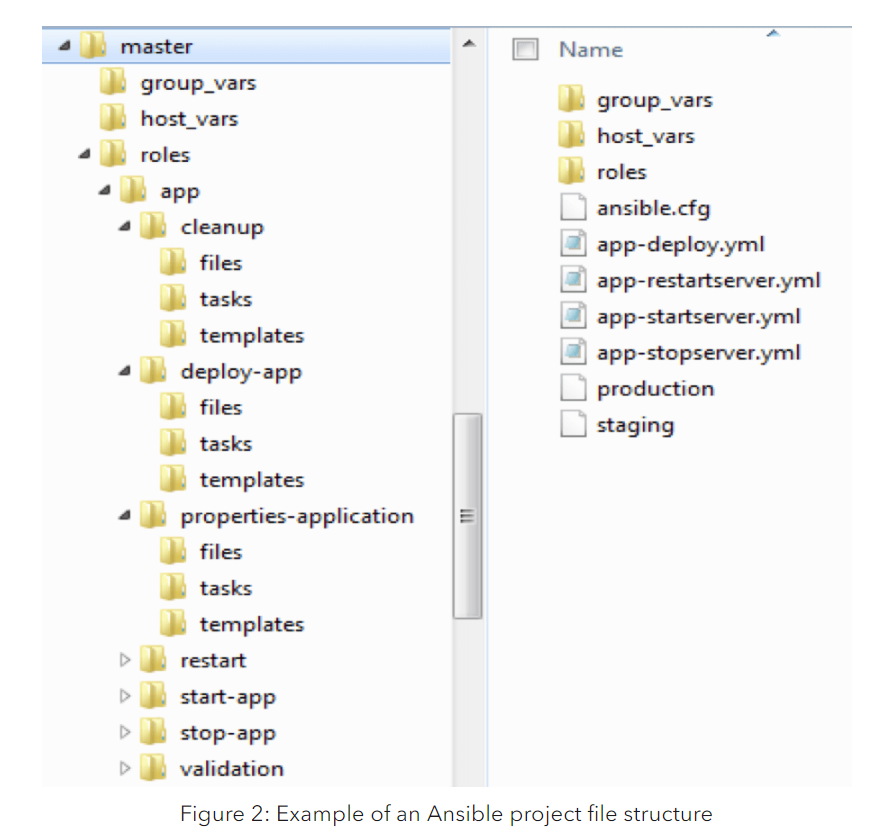 One of the most important prerequisites of an Ansible deployment is connecting it with other systems like application servers and version control systems (SVN, Bitbucket, Serena Dimension, Visual Source Safe, etc.) 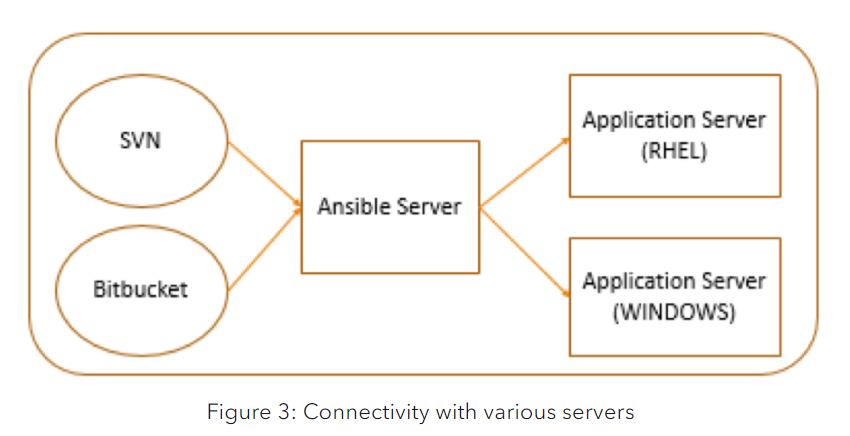 Mechanism to Run an Ansible Playbook

There are many parameters we need to consider while running an Ansible playbook. Consider a case where the developers have developed all the Ansible roles and also created some wrapper .yml files, which contain a set of roles to be executed as part of a particular deployment. The deployment engineer will run the wrapper as per their objective (deploying applications, properties, keystores, etc.)

Here is a generic Ansible playbook run format to use:

In the above run format we need to replace: 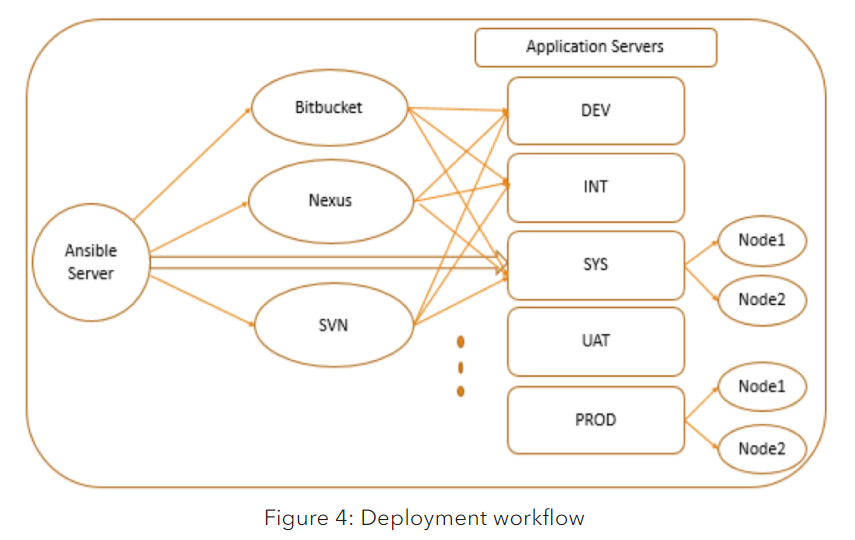 For example, assuming we are planning to deploy our application to production, use the below playbook run command for our PROD deployment:

In our project, we kept our source properties file in Bitbucket, our application .war file in Nexus and all server properties for each environment were maintained in SVN. Ansible allows us to handle this situation by writing our roles such a way that while executing a deploy app playbook, Ansible will get: the properties from Bitbucket; .war from Nexus; and environment properties from SVN, and deploy them in the actual server. Figure 4 above shows the deployment workflow for such an application.

Go Pipeline is an extensively used open-source GUI tool for Ansible deployments. As a Go Pipeline admin, you need to first configure the application in Go Pipeline, and then set up a schedule or run it manually. Any command that can be issued via the Ansible command line can be configured via the UI in Go Pipeline (see Figure 5). For each command, you can explicitly define all the variables in Go Pipeline. 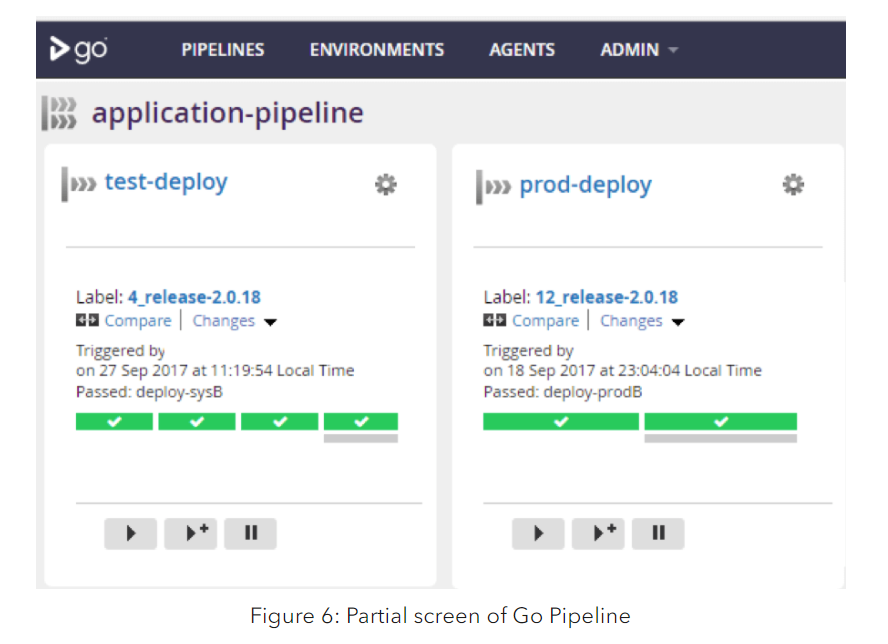 I hope this two-part series has helped you gain a basic understanding of DevOps deployment using Ansible and Go Pipeline. Given the advantages Ansible provides over other tools used by leading organisations, I encourage you to learn more about this alternative approach.

Sukanta is a Senior Web Application Developer for Wipro Digital. He has 10 years of IT industrial experience across various geographical locations. He has published 15 research articles in peer reviewed international journals and conference proceedings.