Building upon this foundation of inter-car communication, various use cases related to communication between the car and its surroundings – including pedestrians and cyclists – are being evaluated. With the rapid advancement of connectivity in cars – more so in recent years – it is useful to have a ready summary of the various kinds of communication technologies available to automobiles. 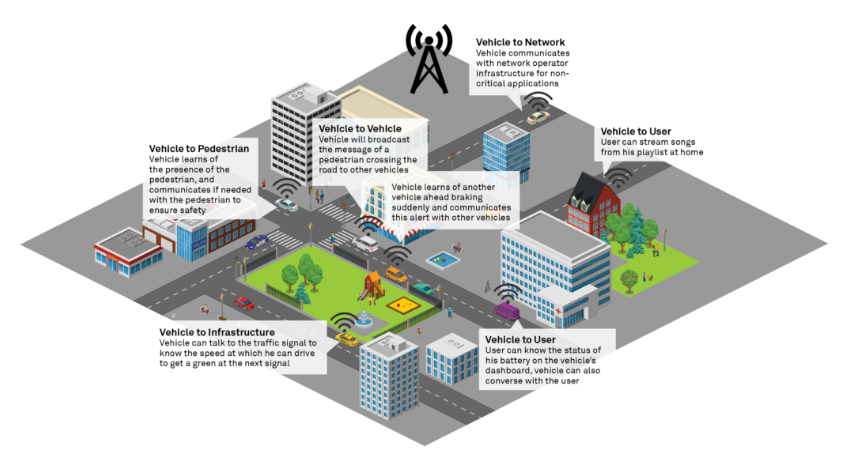 Vehicle to Environment (V2E) consists of communication between the connected car and its dynamically changing environment (which includes other vehicles, cyclists, and pedestrians) as well as communication between the car and its static environment (such as traffic signals, tolling systems, electronic parking, and roads). Some tier-one automotive companies and technology start-ups have shown active interest in V2E, especially regarding safety use cases, and have been leading at the forefront of innovation.

The major difference between V2E and V2U is in the regulatory and network constraints. V2E communication such as V2V and V2I that focuses on alerts or safety-related messages is governed by a tighter regulatory framework compared to V2U – as any slipup can have serious repercussions on public safety. Messages related to safety cannot be dropped, and so that puts additional constraints on the communication protocol and the network itself. For the same reason, the network needs to have low latency and a minimum delay. Unlike V2E, V2U is not intended to address time-critical applications, as most applications are meant for infotainment and convenience (except perhaps for emergency calls from the car). Hence, regulatory and network requirements are not as critical for V2U as in V2E.

V2E addresses safety applications that are crucial for rapid, robust, and timely performance: any delay in message delivery could lead to a potentially fatal collision. Over the years – and with significant transportation stakeholder input – the SAE Dedicated Short Range Communication (DSRC) Technical Committee has developed a data dictionary, SAE J27355, that defines 16 (and perhaps more) specific V2X messages. Safety applications include warnings for red light violations, curve speeds, reduced speed/work zones, emergency electronic brake lights, forward collisions, and so on. All of these warnings are picked by the car closest to their place of occurrence, and then further propagated to the cars around it. For the propagation of such messages, the following communication protocols are used:

DSRC is based on the 802.11 family of Carrier Sense Multiple Access with Collision Avoidance (CSMA-CA) protocol. In this protocol, the device listens to the channel before sending a packet, and any packet is sent only if the channel is clear. This results in a delay due to the time spent waiting for channel availability. In addition, collisions between messages from two or more devices may occur when they transmit at overlapping times. So a DSRC network does not always fulfill the requirement of a safety-related communication where no message is dropped. Additionally, the range that they support is typically 150-300m, implying that the vehicle will not pick up the message unless it is within this range. For safety communication with vehicles, DSRC requires fixed infrastructure called Road Side Units (RSUs). Installing these RSUs on road networks is therefore a major need for the widespread successful adoption of DSRC/IEEE 802.11p.

LTE-V2X works on synchronous communication with high clock synchronization requirements, resulting in the need for better or more expensive hardware. The clock synchronization ensures that no messages are dropped, and digital messages are captured on the edge or level of a clock. Hence, synchronization (frequency and phase match) between the message and the clock is needed for messages to always be captured. However, this sync is generally established using Global Navigation Satellite System (GNSS) signals, which may not be available everywhere (for example, inside tunnels and underground parking lots). As DSRC 802.11p requires deployment of RSUs, and LTE-V2X necessitates clock synchronization hardware, this points to the likelihood that either deployment will have associated costs, which will have to be borne by either the end-user or the government.

5G is poised to bring a range of benefits to enable a connected car ecosystem, specifically: bandwidths that support large data transfer, native support for peer-to-peer communication, improved reliability in transmission of messages, extremely low latency, and failure tolerance features. 5G will serve as an enabler for a whole new set of use cases to augment safety in vehicular transportation that will leverage the ability of increased data transfer. These include the sharing of sensor data among cars, improved positioning using wideband support, and sharing of high definition maps for autonomous driving use cases. A cross-industry alliance of leading companies – consisting of major automotive players like Audi, BMW and Daimler, with telecom services and equipment providers Ericsson, Huawei and Nokia, and semiconductor companies Intel and Qualcommm – is joining forces to evolve, test and promote 5G communications for connected cars. By 2020, this upcoming network will support 212 billion connected sensors and 50 billion connected devices. 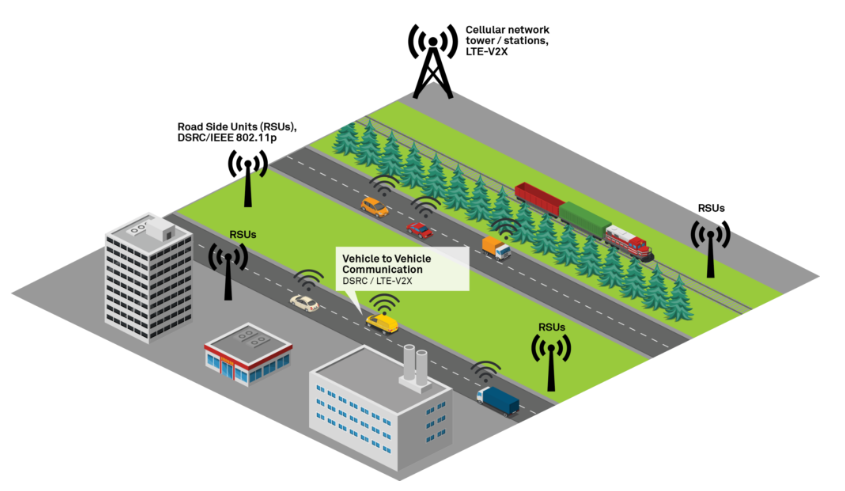