Originally published on “Matters” by Designit

The world is becoming louder and hearing loss is on the rise. We tracked a day in the life of unhealthy sound and came up with concrete ideas to improve our lives.

We limit red meat to avoid cardiovascular disease, sweets and carbs to avoid getting diabetes, and smoking to ward off cancer. But we’ve overlooked a critical danger: sound pollution. Our exposure to unhealthy sound takes place daily, and the damage it causes is often irreparable. The problem isn’t about going to a rock concert or turning our headphones up, it’s about recognizing and mitigating the impact of noise in our daily lives.

Sound pollution not only affects our hearing abilities, but also our general health. The World Health Organization (WHO) asserts that hearing loss is on the rise, which will strain our healthcare system and increase social isolation. Europeans are estimated to lose a total of 61,000 years of healthy life annually through noise-associated heart disease, and they suffer about 3,000 deaths. Traffic noise alone creates chronic stress, which turns up the volume on the health issues - cardiovascular disease, hypertension, diabetes, and stroke - that we work so hard to avoid. Elevated adrenaline and cortisol - our body’s stress hormones - also affect our ability to sleep and to learn. Add to that the fact that 1.1 billion young people are at risk of hearing loss. The evidence is scary enough that we at Designit felt we had to address it.

So we gathered a team of researchers and designers to explore and track the soundscape and exposure to dangerous sound in our own daily lives. Then we asked ourselves how we could change our unhealthy sound habits. We ended up with four sound eluding concepts and a prototype to help people become more aware of the dangers and to minimize our own daily exposure to unhealthy sound. For context: Sound is measured in units called decibels - zero is silence, conversation is 60dB, and that shrill ambulance siren is 120dB.

For most people, their day breaks way before 8am, but for parents, 8am is drop-off time at the local day care or elementary school. For many kids, their time spent in institutions is (mostly) time spent having fun or learning among friends.

But too often, institutions of play can morph into institutions of noise, especially when noise levels average between 75 and 81dB in a school environment. It’s concerning, when you consider the fact that prolonged exposure to >85dB raising the risk of hearing loss considerably, and kids are in institutions all day.

We believe that engaging with children is the best way forward. We wanted to come up with a concept that would engage young children playfully instead of making them afraid. We knew someone had tried a red flashing light that made a loud noise when the classroom got too loud. It frightened the children. Our idea is a playful “friend,” such as a teddy bear, that tracks sound and reacts gently when noise levels are too high. It’s a low-key way to nudge unhealthy sound away while making “play” the focus of kids’ attention. 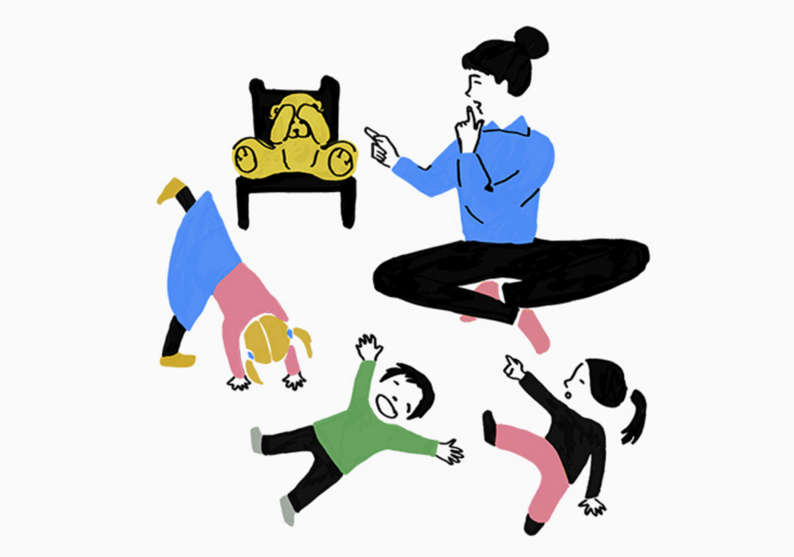 Everyone rushes to get to work once they’ve dropped their kids off. But especially in cities, the fastest way to work is usually a continuum of heavy traffic and annoyance triggers. No one is immune to that build-up of irritation as the person in front of you, on the bike lane or on the road, moves slowly and refuses to make way for you. You’re in a hurry! Can’t they see? While irritation is legit, our road rage is a sign that we’ve immersed ourselves in heavy traffic for too long. Studies show that we become more aggressive and less helpful when exposed to sound levels equal to that of heavy traffic. In fact, according to the WHO, traffic noise alone is harmful to the health of almost every third person in the WHO European Region.

Most of us automatically choose the fastest route to and from work, even if it’s traffic-clogged. But what if we enabled people to choose the quiet route, and get there smart? Our takeaway is a map solution to help commuters avoid heavy traffic so they could stay calm and safe as they drive around town. The map would lay out real-time options, such as a hectic 20-minute bike ride in heavy traffic or a 35-minute bike ride on quieter roads. A slower and less stressful bike ride would improve our moods. 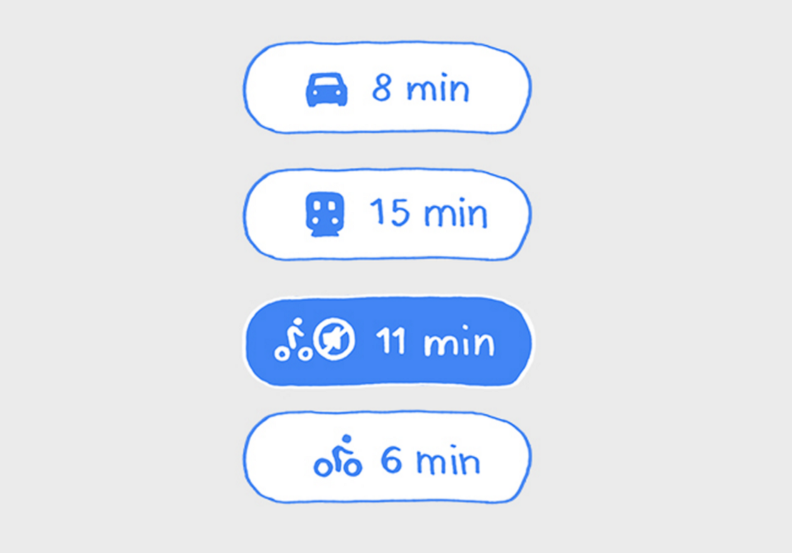 Our lunch break is a time to get offline, relax, and unwind with colleagues. But even a quiet conversation, at 55dD, is a workplace annoyance. So what do you do if you want to just eat your lunch in peace, without going back to work impatient and unfocused?

First, recognize that you’re not alone: 35 to 40 percent of people get annoyed at the lunchtime conversations going on around them.

We came up with a Lunch Break Noise Timeline to track ambient noise levels in a cafeteria or in common areas, over time, so people could immediately decide where they wanted to eat in order to keep their workplace zen. The more information people have, the better. And with a tool that makes everyone more attentive to their environment, maybe everyone would be a little quieter. 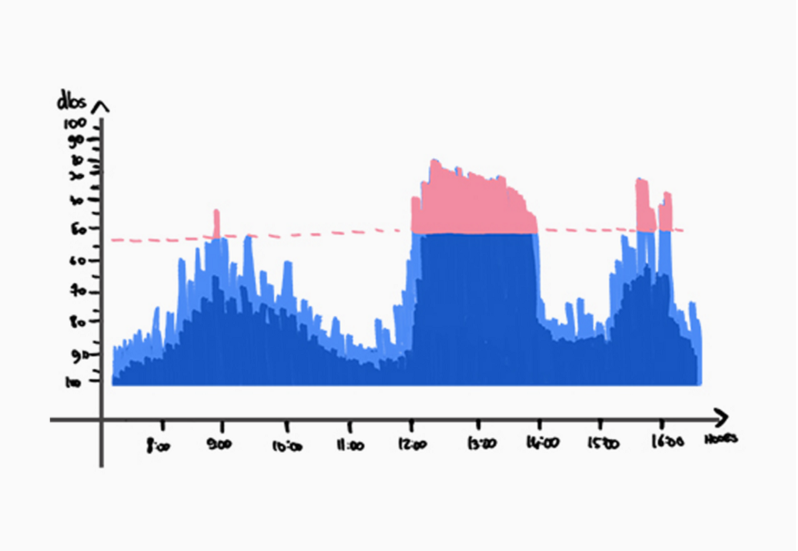 4pm: Don’t let sound get out of control when your kids are home.

It’s been a long day for you and the kids! You’re back home doing your thing. One of your kids wants to watch a video on the tablet. Your head is hurting. You’re not up for another episode of barking rescue dogs or little girls exploring the world. Headphones, you think! On go the headphones and it’s quiet for a while. Then you notice that scattering, high-pitched sound of music drifting out of the headphones that are still perched on your daughter’s head. How did it get so loud, you wonder, before you realise that she has turned up the volume herself.

As parents, we are always looking for a way to keep our children safe, while still enabling them to do things their way. But just 15 minutes of exposure to loud audio, such as that music coming out your daughter’s headphones, is enough to cause permanent hearing damage.

As designers, we created a way to balance safety and independence within aParental Sound Control that kids could not adjust. It would function as a default parental setting to control the maximum audio output on phones and tablets, so you could leave your little ones to their own imagination and games safely. 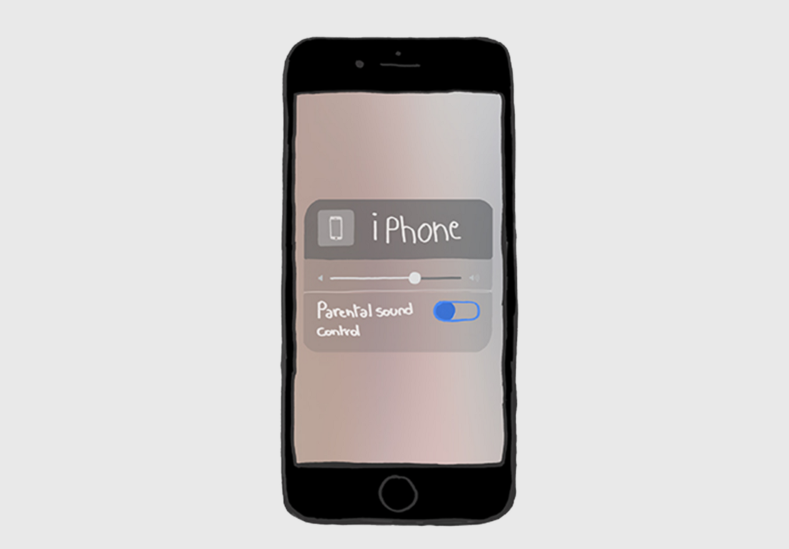 Noise from urbanization and population are growing. So should your concern.

We touched on just four moments in our daily lives that were deeply affected by noise pollution, but we feel that exposure to noise in every setting must be taken seriously. The cost of unaddressed hearing loss alone runs up to around $750 billion annually, according to WHO estimates, but the more insidious consequences of doing nothing is the wide-ranging health effects of noise on our bodies.

In our work, we have realized that the need for a greater understanding and on the spot ability to track the soundscapes of our everyday life, to better visualize sound and hopefully help ourselves and others change unhealthy sound habits.

Here is the hope: Because as we are a generation responsive to the quantified-self movement that encourages us to constantly track our motions, habits, and spending, maybe we can add the ability to track and identify our exposure to unhealthy sound, and take action against it.

Start now and try out our prototype, which tracks your real-time sound level so you can measure your exposure to unhealthy sound - right where you are sitting. https://www.dropbox.com/s/pemhairno9lv5xa/Prototype_iPhone%208.png?dl=0 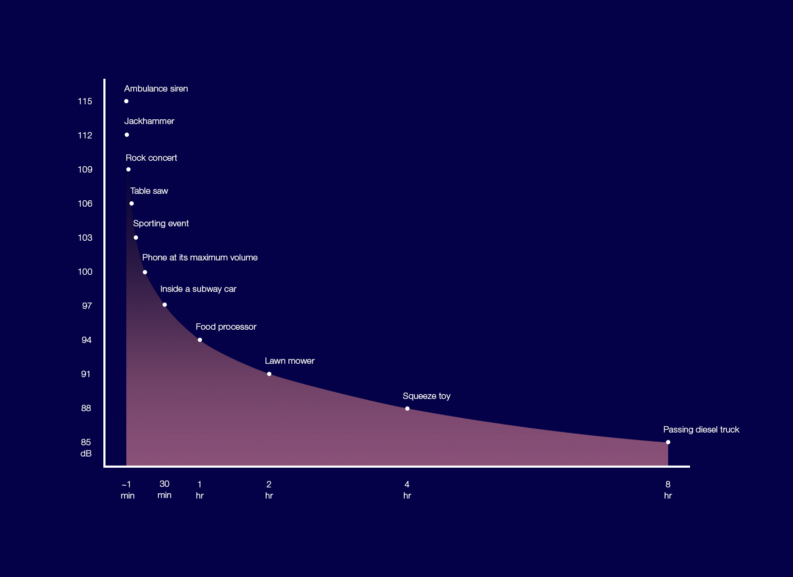