A New World Option for Offshoring

Great value. Tremendous resources. These are two of the many positives Latin America offers as an offshoring location. Latin America has become a draw to industry players in the last several years as we’ve seen Business Process Outsourcing (BPO), Shared Service Centres (SSC) and Call Centres grow significantly in the region. Not only are large multinationals such as American Express, General Motors and Intel running their operations there, but wellknown global BPO service providers, including Wipro, have established delivery centres. In fact, Wipro currently delivers finance and accounting services to the largest beverage company in Latin America from a service centre in Curibita, Brazil.

But Latin America, like Europe, is comprised of many countries with unique cultures, governments and levels of business maturity. So, it takes experience in the region to identify and understand the subtle differences in opportunities that each country has to offer.Our research and work with clients entering this region has allowed us to develop an understanding of what is developing in each country and what the region as a whole has to offer.

What Benefits Does Latin America Offer?

When we evaluate the benefits that Latin America offers, what rises to the top are cost effectiveness, a skilled workforce, language capabilities and cultural similarities. And, while most of these benefits clearly create an advantage to U.S.-based companies, which of course have greater geographical proximity, these benefits are just as advantageous to European-based organisations. Below are some of the key benefits we have found that the region offers:

Costs: Our research on behalf of clients has shown that as a whole Latin America offers a wage arbitrage opportunity of about 30 percent when compared to the U.S. and Western Europe. Colombia provides the most favourable cost benefits in the region, followed by Argentina. Yes, cost savings still remain greater in Asia. However, it is hard to predict how long those savings will be sustainable given that Asia is seeing far higher wage inflation than Latin America and the projections do not foresee any reduction in the annual increase in the years to come (inflation in India reached 14 percent in May 2010 while countries like Chile reached only 1 percent).

Skills: Latin America has a large pool of young (an average of 27 years of age) and highly skilled workers for SSC and BPO services. Brazil, where Wipro has a service centre, has the highest number in the region because of its large population (198.7M). However, we have found that having the biggest population size does not necessarily mean having greater availability of skilled resources. As shown in the table below, the availability of this pool is higher today in other locations independent of their size: 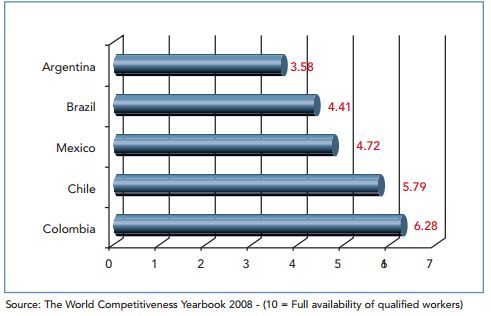 There are many universities in Latin America’s main cities. This combined with South America’s constant economic crisis over the last decades, has made the labour market extremely competitive. This has not only improved labour skills, but has forced universities and other education facilities to invest in new and high quality programmes.

Language Capabilities: Latin Americans are known for their language skills, which allow their countries to provide services to both English- and Spanish-speaking customers. Argentina, Mexico and Costa Rica have the best English-speaking capabilities in the region. We have found that other countries currently emerging on that front are Guatemala and Nicaragua. Additionally, Guatemalans, like Colombians, have a neutral accent that allows them to assimilate other Spanish accents and they are very good English speakers.

Nicaragua, on the other hand, has experienced a massive migration of people to the U.S., caused by the country’s political instability. This, and the fact that many Nicaraguans have migrated back to their country, has improved the availability of English-speaking labour. However, political instability continues to stymie foreign investments that could potentially develop this sector in the country.

Cultural Similarity: North America and Latin America have plenty of cultural similarities, including common European immigrant groups. Countries in these regions have been influenced by European migration over the past decades. Argentina for example, has been heavily influenced by Italian and Spanish immigration. Additionally, a significant pool of qualified Latin Americans has migrated to the U.S. and Europe, either to apply to various post-graduate degree programmes (such as MBAs) or to seek new opportunities that decades of local South American economic crises and high unemployment rates have made unattainable. Many from this labour pool have since returned to their home countries and have brought with them not only greater skills and experience, but also some of the cultural nuances of their adopted country that play a key factor in business relationships. These cultural similarities are key in a BPO environment, and we’ve found that they help improve the interaction between the retained organisation and the outsourcer

Which Location Brings the Best Benefits?

Across Latin America there are locations where companies can successfully establish operations to achieve a more efficient operating model. Argentina, Brazil, Chile, Colombia and Mexico are among the most popular Latin American locations for establishing operations. Wipro has developed a ranking methodology to help organisations decide which of these countries would offer the greatest benefits based on their needs and priorities. The ranking method is based on three primary business criteria, each composed of a group of key factors, as described below:

1. Cost effectiveness: Accounts for 40 percent of the overall ranking and is made up of three factors, with their own percentage weight:

2. Talent and resource availability: Accounts for 40 percent of the overall ranking and is made up of two factors:

3. Business catalyst: This represents the quality of the overall business environment and accounts for 20 percent of the overall ranking. Three factors weigh in here:

The combined score provides a consolidated ranking per location and describes some of the key strengths and weaknesses for each country.

While our methodology shows Colombia, Brazil, Chile, Argentina and Mexico to be the highest ranked offshoring destinations, other Latin American locations are gaining traction. For instance, a global BPO supplier opened operations in Guatemala in 2005 to provide nearshore services to U.S. clients and in 2008 started Financing and Accounting operations for Coca-Cola. Also, one of India’s key players, which currently employs around 1,000 people, is looking to expand Finance and Accounting operations in the country by setting up a second delivery centre. Guatemala is a country that has cultural affinity to the U.S., a highly qualified labour force with bilingual capabilities (Spanish and English) and, like Colombia, its speakers have a neutral accent that allows them to assimilate any Spanish accent, making it ideal for call centre services.

We’ve found clear signals that Uruguay is also looking to grow within the BPO and SSC sectors. For example, in March 2010, a 600,000-square-foot free trade zone called Aguada Park was opened to provide a high-tech infrastructure to companies delivering contact centres, BPO and SSC services (among others) in a well-located region and with low infrastructure and labour costs.

Peru is another country that has managed to catch the attention of global BPO service providers. In fact, one of the biggest Indian suppliers has recently announced the opening of a service delivery centre in Lima as part of its Latin America growth strategy.

So where does Latin America stand in comparison to Asia? Although Latin America shows a promising future, the region is not yet as mature as Asia is today. We’re well aware that Asia remains the most developed and popular destination for offshoring clients due its low labour costs, specialised skills and experienced offshoring community. However, Asia is struggling with factors such as rising wage costs, increasing inflation and currency fluctuation. Latin America doesn’t suffer the inflation rates and wage increases Asia suffers every year and it contains a good mix of labour skills and low operational costs. 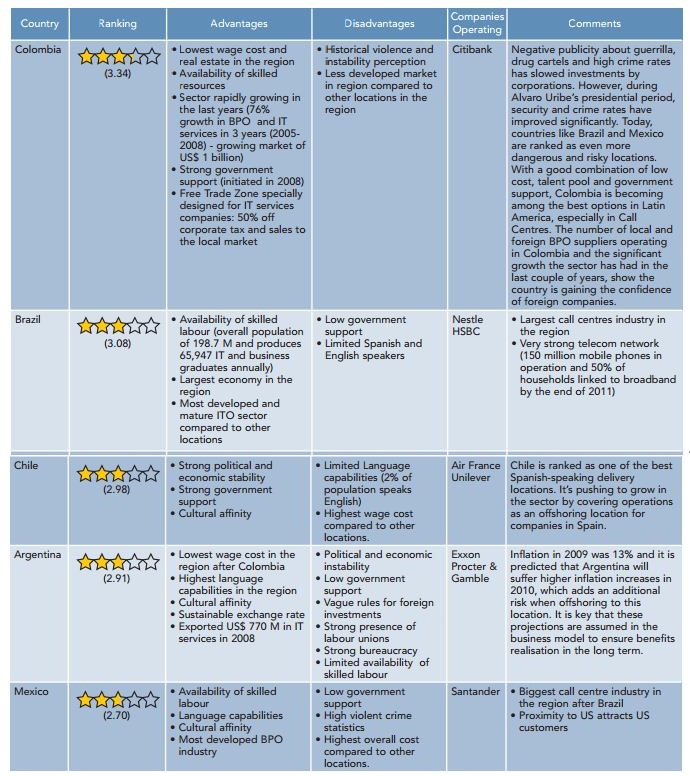 Multinational companies that are considering the business case for offshoring must assess all regions and locations, evaluate their advantages and disadvantages, and target the one that best fits their business strategy and offers the greatest long-term benefits. Many traditional offshoring venues are now undergoing changes that will impact the bottom-line advantages offered in the past while new locales are emerging that could offer tremendous opportunities to the right organisation.

Wipro has been on the ground in Latin America and has conducted extensive research on the factors that are important to 21st-century business success. It is clear to us that if the countries in this region have not been part of the equation in these evaluations, their growing strengths in the form of value and resources should put them in the mix as contenders to help create a strategic organizational advantage. 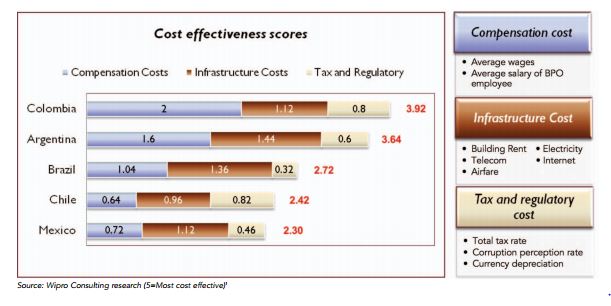 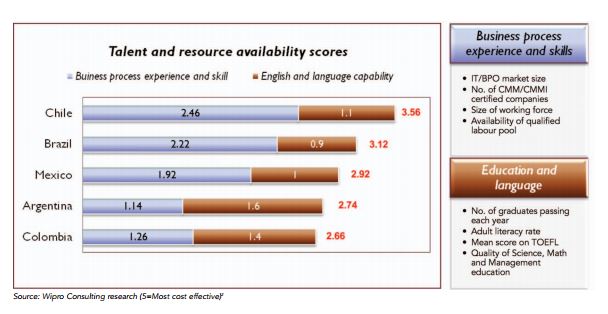 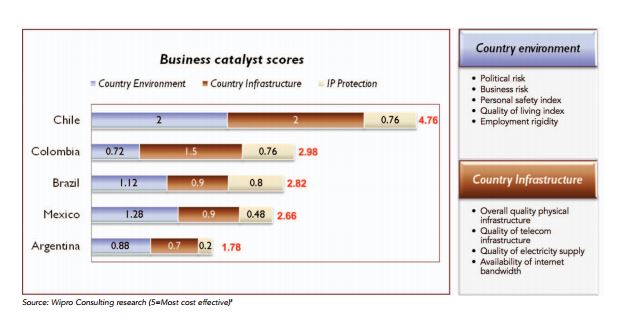 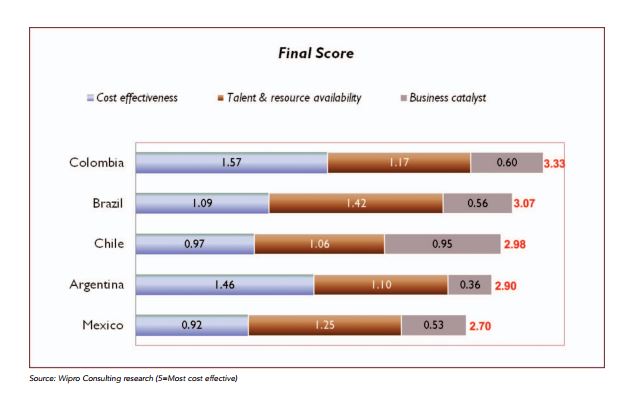