How to Build a Diverse Workforce and Inclusive Culture

How to Build a Diverse Workforce and Inclusive Culture

I start this blog, as in 10 weeks, I have seen some amazingly diverse women employed into Wipro globally, including Sarah Adam-Gedge, Subha Tatavarti, Debra Underwood and Stephanie Trautman, and want to replicate these successes at all levels within every department. This philanthropy-driven organisation is changing the game in terms of the diverse nature of its global workforce.

“Human progress never rolls in on the wheels of inevitability; it comes through the tireless efforts and the persistent work of dedicated individuals who are willing to be co-workers with God and without this hard work time itself becomes an ally of the primitive forces of social stagnation.” — Dr. Martin Luther King, Jr.

Martin Luther King Jr. was a champion and advocate of diversity & inclusion over 50 years ago, long before anyone referenced these terms. He spoke passionately about “all of God’s children” working together. He consistently referenced that including everyone and being diverse in mind was not for the weak and would not be an easy change. But he worked hard to make a global shift, the way we are trying to do today. Moving forward, we need to increase our effort in this direction.

The small cosmetic changes, and some of the larger rocks that we can challenge and iterate within a business of Wipro’s size and growing nature, will ultimately result in huge outcomes of pushing the diversity needle (across all diversity metrics) in the right direction.

Increasing Inclusion & Diversity efforts is not a simple, or an overnight change. It is most definitely not easy work, but it is critical work. It is also not just a Talent Acquisition (TA) action item, everyone has a role to play, from TA > Business Operations > Hiring Managers/Teams > Leadership, among others, all must be included.

3 ways to improve inclusion and diversity in the workplace

1.   Iterate, update, and renew your job descriptions with much fewer requirements, with commercially aligned, gender-neutral/inclusive language

Unlike the world’s biggest sports stars making controversial comments, writing intelligent and engaging posts, and saying things that get noticed globally by billions - this will likely never happen if you are in Talent Acquisition/Recruitment. However, making even the smallest changes, and running your ads through one of many diversity/gender de-coder sites, will certainly help attract the smartest talent from every diversity angle, not just the usual applicants we see for 20+ job openings in companies’ career sites.

Backed by scientific research, there is an art to writing the most effective, searchable and optimized job posting that will attract top talent from every demographic; background, religion, sexual orientation etc. Running your ads, pre-posting through sites like Textio, Katmatfield, Talvista, TextMetrics and others, will 100% help you remove/replace wording like Rockstar, Strong, Lead (includes leader(s)), Individual(s), Decisions(s), Driven, Competitive, Expert, etc. Regardless of where you/your company/TA teams post your jobs, we need to ensure that the language, terminology, format and content will not turn talent from underrepresented groups away from your company and deter them from applying. Regardless of how arduous a task it is, it is critical to use inclusive language.

Taking job adverts that have 30+ mandatory responsibilities, 20+ desirable skillsets and 5+ educational and certification requirements, does not give anyone in any market, let alone all sides of gender diversity any chance of being suitable for your roles. Defining whether the number of years of experience, level of skillsets, which degree or qualifications the person has are actually mandatory vs aspirational is an important by-product of who applies. Setting honest boundaries on what the person will be doing is important, for not only the individual but also for retention and reducing attrition in the ranks.

Wipro, as well as focussing on gender, sexual orientation, racial and cultural diversity, disability, and other areas in ANZ, is also putting a wide focus on talent engagement from Aboriginal & Torres Strait Islanders backgrounds. According to Independent Schools Australia, there were 15,395 Indigenous students enrolled in 929 Independent schools in 2020, compared to only 9,315 in 2015. This will remain a focus talent group for ANZ throughout 2021 and beyond.

In a global study published in 2020 by PwC on Diversity Hiring, it was documented that racially and ethnically diverse companies are 36% more likely to outperform their competition. It is also widely published that companies who sit in the top-quartile for gender diversity at board level / executive teams were 21% more likely to outperform on profitability and 27% more likely to have superior value creation. Globally, the highest-performing organisations on both profitability & diversity had more women in line (i.e. typically revenue-generating) roles than in staff roles on their executive teams.

Wipro has taken many measures to help push the needle during a global hyper-growth period to help remove any potential obstructions during our interview processes. The business has taken 2 actions - Firstly, we globally carry out unconscious bias awareness training, as well as put all interviewers through Interview Certification Program (ICP) Training, including our Senior Leadership Teams. As a second measure, we are consistently trying to ensure that our interviewing panels are diverse in nature, requiring that they include at least one female/ethnic minority interviewer in every process.

In some organisations who publish diversity hiring metrics and data (and not a lot of companies openly share this stuff!), some global organisations (who have over 150,000 employees) depict that each interview panel must include at least two women and/or members of underrepresented minorities. Some of these companies have very happily announced that they were able to increase the number of female hires by 36-44% in less than 2 years. Employers/companies should not only select diverse interviewer panels but also put more work into training Talent Acquisition teams, Human Resources, Business Operations, Leadership and Executives on diversity interviewing so that they are well equipped to drive and champion inclusive recruitment efforts.

It’s impossible as human beings to remove 100% bias, but it is critical to teach, coach, mentor and train interviewers to be conscious of their bias, even when unconsciously taken into a process. Be a champion for change, pull others up on bringing unwanted bias into interview processes, and don’t be scared to manage your own bias by catching yourself, by changing some of the unwanted habits you’ve picked up over your lifetime.

3.   Train management to be fully prepared to hire and lead diverse teams

Consistently hiring for diverse talent is very challenging, and many techniques, platforms and tools will only help a little, but even increasing backend productivity by 0.1% across all areas will make a huge difference at the front-end, so do not be disheartened by what is difficult, as everything worthwhile in life, has its difficulties.

Managing a diverse team of people, small or large, who come from different backgrounds and experiences is also difficult. During our recruitment processes, we often look for individuals with leadership skillsets, and this is at all levels. We do not look for “managers”, we look for leaders, and not by title/designation, but by skillset, mentality and work ethic. Think like a leader, act like a leader and leadership titles and responsibilities will follow. We often look for experience working in, and managing cross-cultural teams and when onboarded, Wipro leadership work endlessly to ensure that all of the right behaviours are being displayed when managing all diversity categories. Wipro’s L&D team identify training and certifications needed (both internally and externally) and push these onto all employees and leaders to ensure seamless transition into a multi-cultural organisation like Wipro.

If your organisation is not as mature as some, and L&D, Training Depts and teams around you are not able to utilize the power of courses, LinkedIn Learning offers a wide range of online courses, including Managing Diversity + Managing a Diverse Team. LinkedIn Learning has courses like Diversity, Inclusion, Belonging for All, among others that can assist in getting anyone up to speed prior to training internally within your organisation.

How does it make a difference - Facts and industry changes

The impact of COVID-19 has been utterly devastating for women in the workforce. Millions have lost or left their jobs, and a recent analysis revealed that while men in the United States gained about 16,000 net jobs in December 2020, women lost a net total of 156,000 jobs.

After a huge decline from March to May 2020, the share of women among new hires surged back almost as quickly as it fell. In fact, the global gender split of new hires in January 2021 was 1% more female than it was in January 2020.

An interesting fact from 2021, is that the job of the moment is no longer Technical Architect, DevOps Engineer, Software Developer, Cloud Solutions Delivery Lead, AWS Engineer etc. It is in fact, a job category and designation that almost everyone agrees not one person is a perfect fit for, knows what exactly the ideal principals and best practices actually look like on paper, what the mandatory/core/desirable responsibilities are, or even what the name of the role is…

Diversity roles in general are on the rise, and leadership roles within Diversity are growing at a rate of knots. Figure 1 shows the growth of job titles in diversity over the last 5 years (2015 vs 2020). Some examples of this growth from 2015 to 2020 include Diversity Consultant growing 302%, Head of Diversity growing 107%, Director of Diversity growing 75%, and Chief Diversity Officer growing 68%.

Many people think that there is a science to everything…well! Whole-heartedly, I believe there will never be a perfect science to the art of acquiring talent, and recruiting the world’s biggest and brightest.

Dedication, being a champion of change, and moving the needle as far as possible takes effort, and with effort comes success. You will never know unless you try!

“Do not look the other way; do not hesitate. Recognise that the world is hungry for action, not words. Act with courage and vision.”

Famously quoted by Nelson Mandela, this statement can almost be applied to anything, but can most definitely be applied to Diversity, Equity and Inclusion in the workplace. Too many companies and individuals say they are trying to make changes but continue to do what they always have.

Embrace the change, try endlessly to assist and start to be recognised as a champion for change, while making a difference to you and those around you. It’s not just you who need to embrace this shift in society, but everyone at your company too.

If you are interested in knowing about the approach to Inclusion and Diversity at Wipro, connect with us @ info@wipro.com 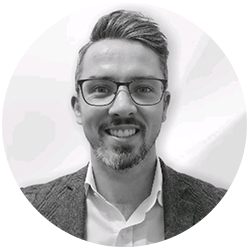 Kris Clelland has over 18 years of professional experience, predominantly gained within the IT sector. He has had the chance to build a successful career in Global/Senior Talent Acquisition Management, IT Specialist Recruitment and IT Sales Leadership & Management; building Talent Acquisition and Recruitment teams for organisations like Amazon Web Services, Planit, Zip Co and now, Wipro. Starting off with an Engineering degree, he moved quickly into pre-sales technical solutioning, IT sales/management and now in global leadership within Talent Acquisition. He is highly passionate about truly leading, (not managing) teams with particular focus on Diversity, Equity & Inclusion (DE&I), Eliminating Bias & Discrimination, Early Career/Graduate hiring, Digital Transformation & Talent Process Automation, Employer Branding, Organisational Agility, Candidate Experience and Recruiter-Tailored Technology, Remote Working & Virtual Recruiting.