Microservices Governance is a methodology or approach to establish policies, standards, best practices and guidelines on the adoption of Microservices to enable enterprise agile IT environment.

Microservices promote the polyglot model regarding technology stack for supported languages, tools, and data stores. Reusability of assets and tools is the main concept of Microservices, rather than centralized. A decentralized model is best suited for Microservices governance. Decentralized governance gives Microservices teams the freedom to develop software components using different stacks.

The following diagram demonstrates these elements, 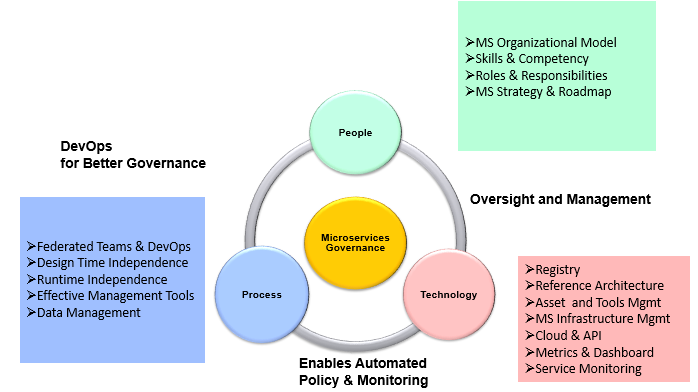 Some of the key guiding principles for establishing successful Microservices governance are:

A Microservices team consists of various members with different skill sets such as system analysts, UX/UI designers, backend and frontend developers, etc. The teams are responsible for their project (Microservice) from end to end.

The size of the team depends on the size of the enterprise along with the project being developed. Experience shows the ideal size is 8-10 people per team.

Agile and DevOps Environment: Services are small and developed by small teams. Agile makes it possible to release frequently in small chunks and hence show business progress. Instead of deploying one application, the team would be deploying many services.

Data Strategy: An MDM strategy is required to support the distribution of data. Consumption of Core data of an enterprise, done by multiple Microservices to be stored in their local databases.

Usage of dynamic registries helps to track the services that are deployed and monitored. These registries provide lookup addresses to the consumers of the services.

API is used to establish the interaction between the Microservices, which helps the application to work properly.

Infrastructure management monitors storage, CPU consumption, memory consumption, and hardware network characteristics for deployed services. If a service is deployed on an IAAS or PAAS platform, then the respective cloud or platform management tools are used.

This involves monitoring the application service deployments for uptime, and health. Services can report their health by Pull mechanism via JMX, or exposing an HTTP URL.

In a Microservices environment, developers keep adding and removing functionalities frequently. Developers change the code all the time implying that Microservices are constantly evolving. The way an application is broken down into numerous interdependent services, large and siloed teams are broken down into small, multifunctional teams. The development, testing teams transform into smaller DevOps teams. The team that builds the Microservice owns its implementation and maintenance.

Defining and controlling the service creations, design, and implementation of service policies.

In summary, Microservices adopt decentralized governance, which means that standards enable the team to better build and deploy the code that they have created according to their individual governance plans. The goal of decentralized governance is to free development teams to solve development problems more efficiently and with greater speed. It is important to develop a Devops mindset within the enterprise so that developers are more in control of how their individually governed components are built and operated.

He is a Certified Open Group TOGAF, AWS Solution Architect, IBM Cloud Solutions and serves as an Advisory Architect, Mentor on Enterprise Architecture, Next Generation Architectures, Application Portfolio Rationalization and Architecture Assurance initiatives, and continues to work as a Subject Matter Expert and Author. He has worked on multiple architecture transformation engagements in the USA, UK, Europe, Asia Pacific and Middle East Regions that presented a phased roadmap to transformation that maximized business value, while minimizing costs and risks. 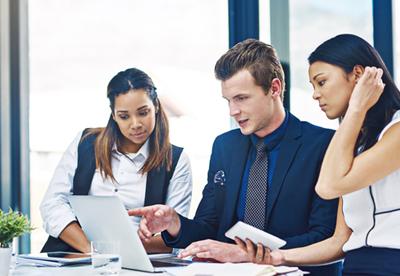 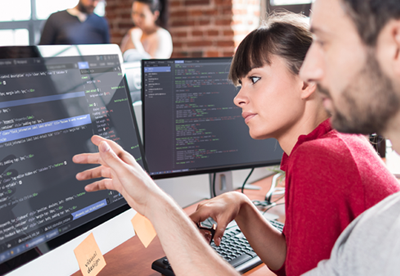 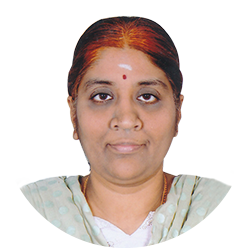