This article was featured in WOOL. Last updated for Wipro.com on March 6, 2020.

Aubrey Blanche, global head of diversity and belonging at software firm, Atlassian, is a former journalist and also, a former academic researcher focused on international security (terror and military operations). She decided to quit her Ph.D. and ended up working in the tech industry. There wasn't a method to the madness but as Blanche puts it, her career graph only makes sense in hindsight.

Blanche, with her shock of pink hair, is often a misfit in boardrooms. Some might say she is the perfect crusader for diversity. "I like having pink hair, it is my vibe right now," she states simply. But there is no denying that pink and piercings are rare C-suite sightings. "When I look like this, it begins to broaden people's idea of what a leader should or should not look like. I know my job, I am confident of the value I can add as a professional and when you project that attitude, I think people are less likely to question your style."

Blanche surely knows her job. She has been credited with crafting a vision and strategy that has helped Atlassian increase female representation in its technical workforce from 10% to 17% in the last three years, whilst also growing representation of people of color and employees over the age of 40.

"People are emotionally exhausted from pushing for change and not seeing enough progress." - Aubrey Blanche

One might imagine she'd be excited to talk about diversity and inclusion in tech firms. But Blanche is not really enthusiastic. "Conversations on this topic started to gain ground around 2013. Despite talking about it for the last five or six years, there has not been much meaningful change," Blanche reflects. She points to a growing fatigue that has set in when it comes to talking about diversity and inclusion and says progress has stalled. "People are emotionally exhausted from pushing for change and not seeing enough progress," she says. Plus, because of the current sociopolitical environment, everyone is struggling with the depth and dimension of diversity issues and are easily overwhelmed, she adds.

According to a report on the state of diversity and inclusion in U.S tech, commissioned by Atlassian in 2018:

The mission at Atlassian is to move past the traditional understanding of inclusion and diversity and focus on something far more fundamental to human beings - a sense of belonging, something that Blanche says, can only be created.

According to her, the sluggishness around diversity and inclusion stems from having the wrong conversations and following the incorrect metric. "Most companies are looking at corporate level statistics. If you have 50% women but all of them are in human resources or marketing departments, or perhaps at entry level positions, there is a problem," she says.

This also does not translate to individual level action and contribution because the average employee does not know how to contribute to company level statistics - something Atlassian deeply reflects on while tailoring its belonging programmes. Blanche offers a solution - equip individuals with skills that make an impact within their sphere of influence and attempt to raise the collective standard of how people engage in the workplace. After all, belonging is often forged by small but significant aspects of human interaction; a greeting or perhaps, a gesture. "When the focus is on individual action and what one person can do on a daily basis to improve the team environment, there is much less chance of feeling fatigued or burnt out," notes Blanche; it is about using emotional intelligence and effective collaboration to create a team-level experience.

And it is a win-win. Blanche says having more diversity on teams is gainful because it is proven that a diverse group of people are better at problem solving. But when companies do not take a team-level approach to diversity, they obviously miss out on the edge it offers.

Blanche is a self-confessed data nerd. In fact, she strongly recommends a data informed approach; measuring and testing before figuring out a solution has been key to her implementations. True to her taste, Atlassian conducts an internal engagement survey of the inclusion index.

Blanche explains the questions it asks and what it seeks to measure.

One reason why Blanche propagates the expansion of diversity and inclusion to belonging is to create far more equitable processes. "At Atlassian, we have been intersectional from the start. We understand that individuals have layers. When inclusion refers to gender alone, it creates a silo. We include mental health, parental status, age, temperament differences - all of which, have a strong bearing on the feeling of belonging," she adds. 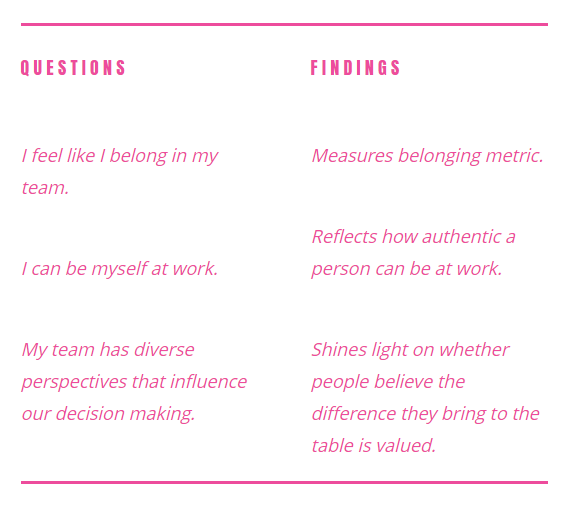 Belonging in the silicon valley

For most people, the Silicon Valley is the birthplace of modern human existence, since most of life as we live it, is dominated by technologies. It is where we imagine our next 50 years are being envisioned; a place where young people (including college drop outs), wearing casual clothes and flip flops, are devoted to finding new frontiers.

However, this is a Silicon Valley prototype. As Blanche points out, "Often this is the person who looks and behaves very much like the founder."

There is no dispute on the contribution made to technological progress, innovation and human life but at the core, the disruptive work culture of Silicon Valley prides itself on meritocracy, warns Blanche. "People are often hired on the basis of schools they attend or their resemblance to the founder, etc. - not for their skill set," she explains. We constantly put one demographic on stage or in C-suites and we must stop, Blanche adds. In meetings, unconscious bias plays out when a woman is interrupted three times. "Because bias is unconscious, it cannot go unchecked. One has to be held responsible for both intent and action," Blanche opines.

"When inclusion refers to gender alone, it creates a silo. We include mental health, parental status, age, temperament differences - all of which, have a strong bearing on the feeling of belonging." - Aubrey Blanche

Hardwired prejudices are reflected in job descriptions too. "You will often hear job descriptions stating, we need a coding ninja! Leave aside that this type of messaging can be offensive to certain cultures, it also alienates a certain section of people who can perfectly fit the job. There is nothing wrong with just asking for a software engineer!" Blanche explains. Similarly, the slogan work hard, play hard does not resonate with someone who has three kids or outside responsibilities. "Question whether the language we use creates an enticing environment for possible candidates or even a compelling vision of what technology is or should look like," says Blanche.

Bias can be a real bane to innovation, the strong suit of Silicon Valley. As Blanche puts it, innovation is fuelled by the ability to define problems and solve for them - this process necessitates new thinking and different perspectives; it cannot be mired in prejudices, which in turn, will show up in the solutions and technologies of the future, and ultimately, affect the quality of innovation. Women ask different questions; that they are needed in executive levels has been said so often, it now nearly sounds tone deaf. Yet tech is always grappling with talent crunch and is on the lookout for female role models.

Blanche does not undermine the need for the motivation female leaders can provide but insists we reconsider how we have talked about tech so far; what stories we have told and reiterated. "The first computer programmer was a woman but do we talk about her the same way we talk about Bill Gates, Elon Musk or Mark Zuckerberg?" she questions.

HOW TO REPAY THE DIVERSITY-DEBT

Yes, the fact that the number of women computer science graduates has declined from some 35% back in the 1980s to just 17% is relevant in the talent-discussion. "The attrition rate of underrepresented people is much higher in organizations and to me, it sounds like a good problem to solve. We can keep churning out tech grads but if we don't invest in the environment they will work in, will it matter?" asks Blanche.

Despite Atlassian's success rate, Blanche is right to point out that the fatigue surrounding diversity and inclusion needs an industry-wide addressal. "We must hold ourselves to the highest standards when it comes to nurturing talent and training for future leadership," she said. There is a common misconception that having a diversity and inclusion programme is tough, expensive and requires a lot of resources. But Blanche insists, building a culture of kindness takes zero dollars and runs on the will and desire of the founder. The diversity-debt, as she puts it, has accumulated because of consistent negligence. "When you de-prioritize working on something for a long time, it just becomes tougher to work on and achieve," Blanche signs off. 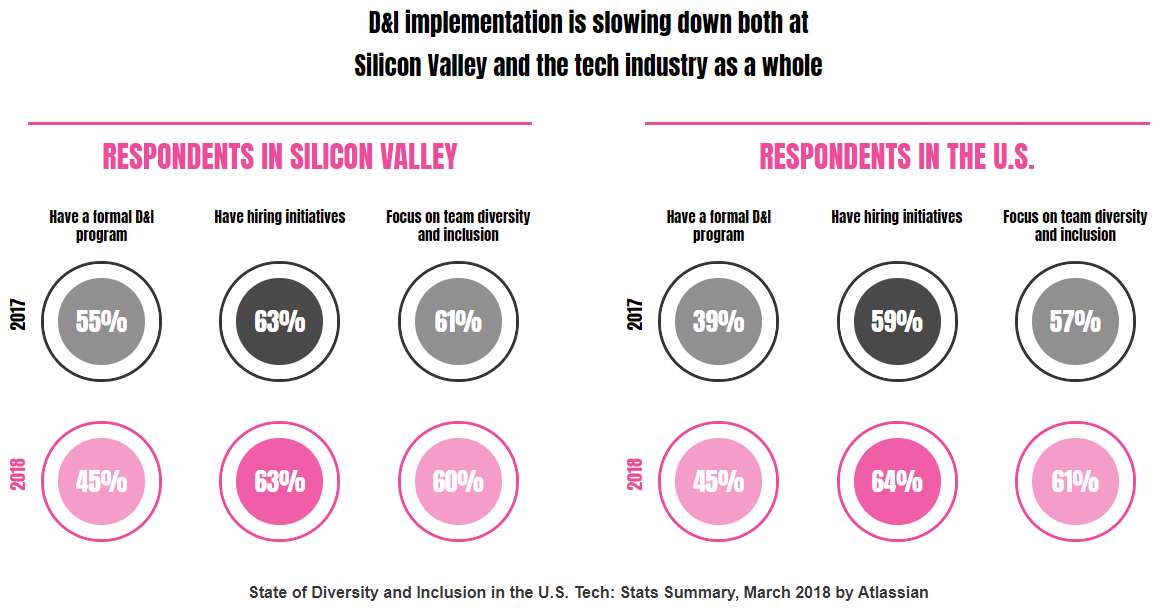 Aubrey Blanche
Global head of diversity and belonging at Atlassian on the fatigue around inclusion, and how to repay the diversity-debt. 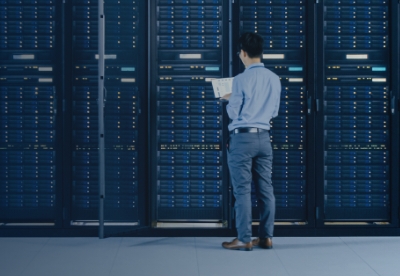 Migrating your data and services to a public cloud service like Google Cloud offers multiple advantages, including increased flexibility and agility.... 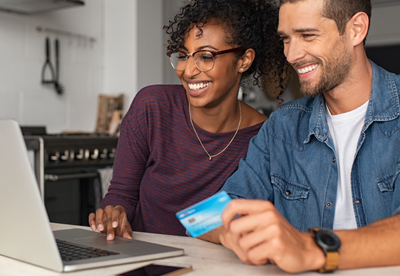 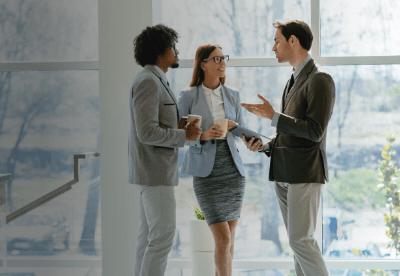 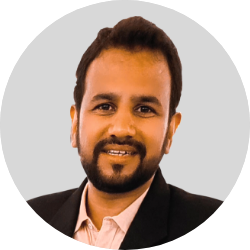