Blockchain comes to the rescue

Typically, in the oil industry, the value chain would include well owners, producers, subsidiaries and joint ventures of producers, royalty managers, carriers and pipeline owners, downstream operators, regulators and governments. Each party measures product volumes and other critical parameters individually at different points of time. They use processes, tools and systems calibrated to meet their industry standards and protocols. Often,

the outcome of this is conflicting data and contractual disputes between parties, resulting in expensive rework, delays and the overheads of resolution management. In view of rising operational costs and regulatory pressure, there is an urgent need to set up a solution that uses a consistent interpretation of contracts and transparently provides oil measurement information on an independent and trusted platform. Blockchain technology offers that solution. It can create a robust, reliable and cost-effective solution to what has historically been an intractable problem in the oil custody transfer process.

Let’s first look at the “as-is” process between Party 1 and Party 2 in oil custody transfer (see Figure 1). The amount calculated in Step 6 and 7 should be within the prescribed tolerance for Party 2. If it isn’t, it is Party 2’s problem and needs to be rectified by them. The same holds good for Party 1 in Step 8. After Step 9, the amounts are tallied and should be within the prescribed tolerance limits. If not, a dispute is raised. 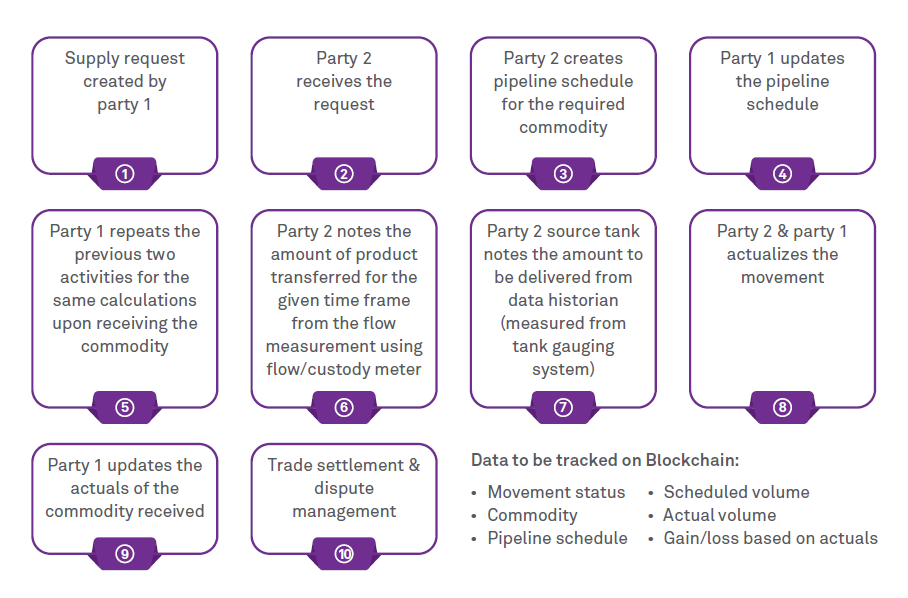 Adoption of Blockchain solutions by the industry is inevitable, it will happen sooner rather than later

The Blockchain platform, with its distributed ledger, would provide a single source of truth that would increase trust, build consensus and reduce disputes (see Figure 2). 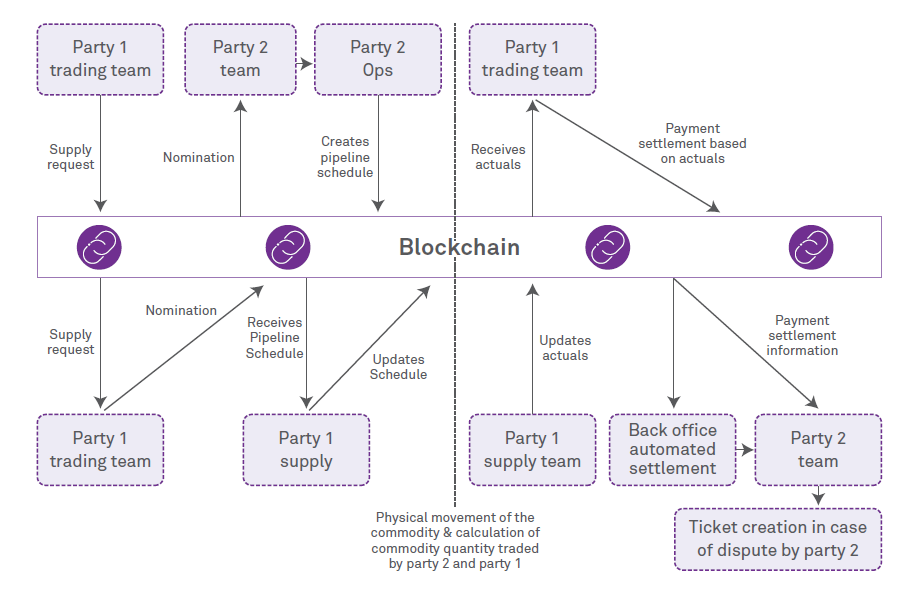 By combining Blockchain with smart metering and IoT, the platform would have the potential to eliminate ambiguity and drive real-time reconciliations. Transfer values at each transaction point (see Figure 2) would be read by the sensors and directly written into the Blockchain network. Finally, values from both parties would be noted, governed by business rules/ smart contracts, and matched. Based on the results, automated payment settlements could take place between the parties. Faster payments, made on the basis of immutable data, at each custody point would spell a major advance in operational efficiency.

What would be the model for a Blockchain platform to manage oil custody transfer? There are two ways to look at the model. The first is a near-term model where a blockchain pilot is set up between two (or more) trading entities or subsidiaries. The pilot is explored by the entities involved. The value of the pilot is proven and the platform is thrown open to other interested operators. The second model is to set up a consortium that owns and operates the platform with each organization having a node on the platform network. In both cases, it is possible to take the platform from concept to implementation in four months, with a further six months required to take it to production.

Organizations in a variety of industries are already using Blockchain’s autonomous and distributed ledger capabilities effectively. FedEx uses it to track high value cargo and plans to use it as a single source of truth for all shipments, for customers, customs officials, sellers and delivery servicesi. Louis Vuitton and Christian Dior are using it to track and trace high-value luxury goods, from the history and provenance of the product’s raw materials to environmental and ethical information, point of sales, care services and down to second-hand marketsii. They, along with others, are demonstrating how blockchain can address issues around value transfer, such as measurements, location, product and service status, authenticity, cross-border challenges, reconciliation and settlements with zero duplication of effort, lowered costs, improved trust levels and superior user experience.

For the oil industry, the benefits of Blockchain would include:

Given the challenges around transparency, trust and security, adoption of blockchain solutions by the industry is inevitable. It will happen sooner rather than later.

With 14+ years of global experience, Muneeb is Blockchain Partner - Consulting & Advisory and leads the blockchain theme for EMEA at Wipro. Muneeb’s role involves the evangelisation of Wipro’s blockchain solutions with customers and the global blockchain ecosystem. His focus is to design blockchain / de-centralised ledger solutions for high-impact industry use cases, ecosystem and consortia development.