While risk accumulation is not new to the insurance industry (insurers or re-insurers), it is becoming more widespread and pervasive due to the growing complexity of business, advancement of technology, adoption of new ways of doing business, new-fangled categories of risks (e.g. cyber risk) and the quicker and wide-ranging availability of information.

The 14th edition of the ‘The Global Risks Report’ published in 2019 by the World Economic Forum showcases a grim view of the interconnectivity and pervasiveness of risks in todays’ world1. 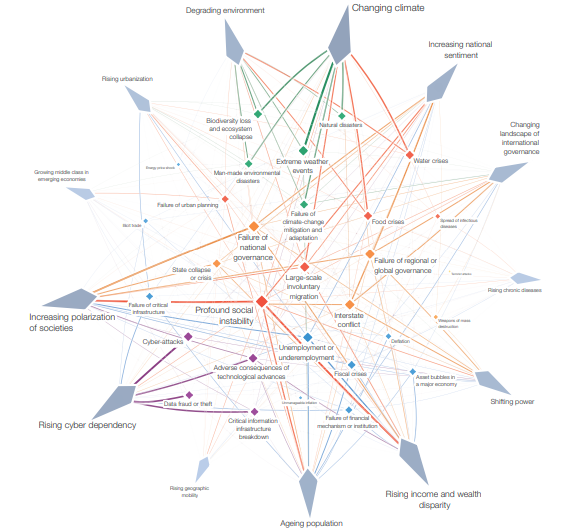 Environmental factors and extreme natural events such as hurricanes, earthquakes and tsunamis have been constant challenges for insurers. Rapid urbanization across geographies coupled with engineering marvels in building large-scale infrastructure projects (e.g. massive ships carrying a staggering amount of goods), have significantly changed the traditional view of law of large numbers and erstwhile risk selection methodologies.

Expansion of end-to-end technology with increasing examination by regulators, various rating agencies, investors and stakeholders are driving the need for insurers to better understand and manage the accumulation of risks and address them judiciously.

In this article, we will look at different risk accumulation scenarios across lines of businesses, understand how technology can help insurers to avoid, mitigate and minimize risk accumulation situations, and thus achieve better control in managing high severity loss scenarios.

Today, even a single risk event can pose a far-reaching impact with a snowball effect on any insurer or reinsurer. It doesn’t usually restrict to any specific line of business or class-specific loss.

Let’s look at a few case studies to better analyze and understand what went wrong in some risk incidences and the lessons learnt from each of the scenarios:

Hurricane Katrina has been the costliest disaster in the history of the global insurance industry, causing a mammoth $60 Billion in insured losses and almost double the amount in overall damages2.

While accumulation control of natural perils’ exposure is presumed to be a well-implemented process at property insurance companies, Hurricane Katrina losses still exceeded the modeled loss. The prominent reason for this among others is that the risk modeling scenarios didn’t consider climate change into account.

With technological advancements in the field of big data and predictive analytics, risk modeling has evolved in a big way, thus allowing (re)insurers to rapidly adopt changing modelling factors and implementing the same to gain competitive advantage.

A series of explosions at the Chinese port Tianjin in 2015 resulted in severe losses, largely due to risk accumulation. Approximate industry losses were $2 Billion. An investigation states the cause of the disaster to be “an overheated container of dry nitrocellulose”.3

Erstwhile CAT risk modeling is focused more on static risk (e.g. building and infrastructure in and around the port) thus posing a high risk of eliminating the associated variable risk that is influenced by accumulation of cargo at the port. Thus, in such eventuality, the actual loss will always exceed the modelled loss.

Technology can play a pivotal role in monitoring volatile cargos and help in preventing major losses. Today, by using IoT, sensors can be attached to the cargo container that can automatically monitor and send feedback about the status of the cargo and help avert such contingency. In addition, Big Data and analytics can help in enabling better assessment of cargo risk accumulations and in creating more sophisticated modeling.

Malware attacks, data breaches, IT service provider outages and computerized attacks on critical infrastructure are four of the major cyber perils of the 21st century. The increasing interconnectedness of risks in cyber supply chains and the shared vulnerabilities of commonly used software or hardware components make the whole chain vulnerable. In the case of a single event generating a widespread impact on thousands of businesses at once, the accumulation of liabilities within a portfolio of policies could expose an insurance company to high financial losses.

Cyber risk market has been growing exponentially in the recent years. Although the loss ratio remains favorable compared to other lines of business, there are instances which has showcased its vulnerability. The Global Risks Report 2019 highlights huge financial losses that were a result of cybersecurity breaches. Ransomware attacks caused some of the largest costs in 2017 and accounted for 64% of all malicious emails. Examples include NotPetya, which caused quarterly losses of $300 Million to some affected businesses, and the WannaCry attack—which affected 300,000 computers across 150 countries4.

Insurance companies are on the path of defining a capacity and continuously monitoring cyber risk accumulations in their portfolio from such events and set limits on the amount of exposure that is found for such perils. Technology helps through modelling of cyber accumulation for their assortment.

Risk accumulation is a stimulating task when it comes to cyber risk; the modelling technics used for insurance lines of businesses are not adequate for cyber risk modelling. One of the prominent reasons being that risk modelling mechanism is highly data motivated. These data are processed through different statistical models to derive a pattern. In regards to cyber risk, historic events are limited, thus predicting the future losses becomes exceedingly difficult as the threat factors are continuously and rapidly changing.

Predicting the weakest link of the connected nodes is the crux of cyber risk modelling. Leveraging big data analytics of interconnected risks coupled with the application of advance level modelling can identify and pacify the widespread impact of a cyber-attack.

Liability risk accumulation modelling and evaluation is even more challenging. Bhopal Gas strategy in India in 1984 caused by accidental release of methyl isocyanate gas in air, led to an immediate death toll of 3,787 as per government record. It is estimated that 8,000 died within two weeks, and another 8,000 or more died later from gas-related diseases. The owner of the factory UCC, in 1989, paid $470 Million to settle litigation stemming from the disaster5.

In this case, the latent liability catastrophe risk was overlooked, which caused the long tailed devastation.

A better understanding of the risks, usage of historical data, and detailed hazard category plan with reference to connected macro-economic risks should be used for risk accumulation modelling for liability risks. Also, leveraging latest technologies like IoT through sensors and actuators, and AI-driven command and control center for monitoring and preemptive actions, can help in preventing and minimizing such devastating and long tailed loss events.

Transforming is the key, especially IT, which will be a great enabler in bringing together risk management technologies like Cloud computing, Internet of Things (including telematics), Big data, Analytics, Artificial Intelligence and Blockchain. And this will necessitate latent amount of investment in order to integrate the data within the insurance organization.

Krishnendu is a member of the Insurance Institute of India and has over 15 years of experience in core insurance processes (claims and underwriting), business analysis and requirement elicitation in P&C Insurance domain. He has worked across geographies in various implementation and transformation projects.