There has been a steep increase in cloud adoption, both by private and public enterprises, for hosting their workloads. Cloud players have made this possible by providing viable solutions to the consumers, who pay only as they use.

Hybrid cloud deployments are gaining traction as they deliver the security of private cloud along with the flexibility of public cloud. This computing environment that allows data and applications to be shared between public cloud and private cloud, demands new standards of compliance and standardization of network and security configurations and policies.

Traditional ways of connecting the cloud and on-premise datacenter involves various modes like configuring Virtual Private Network (VPN)-native networking constructs. This model though successful, requires skill, effort and involves constant monitoring of the tunnel, which has dependency on firewall/router on the premises. There are cloud networking only solutions which are best suited for multi-cloud networking and help in extending connectivity between various clouds. However, the policy and control remain local to the various clouds and not hybrid for cloud deployments.
Software defined networking (SDN), which offers an application-centric approach in data center networking in contrast to a network-centric approach, is looked upon as a game changer in hybrid cloud networks. It enables the elasticity and responsiveness required in hybrid cloud computing.

Connecting to cloud: The current models and the challenges

Networking for cloud connectivity can be achieved multiple ways. Connectivity via the standard way involves building and operating IPSEC tunnels from cloud to on premises. Figure 1 depicts the standard way of extending reachability from on-premises to public clouds.

Software defined networking (SDN), offers an application-centric in contrast to a network-centric approach.

Several other ways of extending the connectivity involve cloud networking solutions that provide an overlay tunnel between the on-premises and cloud. This method, though effective, cannot extend consistent policy and control and relies on the respective native network constructs.

Other ways of extending connectivity include the direct connect/express route from respective cloud providers to the on-premises. Figure 2 depicts connectivity between an on-premises datacenter to public cloud through Cloud Exchange locations.

A cloud service solution extends connectivity between on-premise and corresponding cloud construct by pairing with a Cloud exchange connect location. Though this method provides advantages, the configurations required to extend the reachability is manual with multiple touchpoints and stipulates certain essential skill requirements.

Different connectivity types like IPSEC over Internet, Direct Connect, Express route and through Cloud broker, each have segregated control and management planes which require additional skills over and above the standard networking skills.

Figure 3 depicts the typical challenges faced by organizations while adopting various strategies for networking with the hybrid cloud. 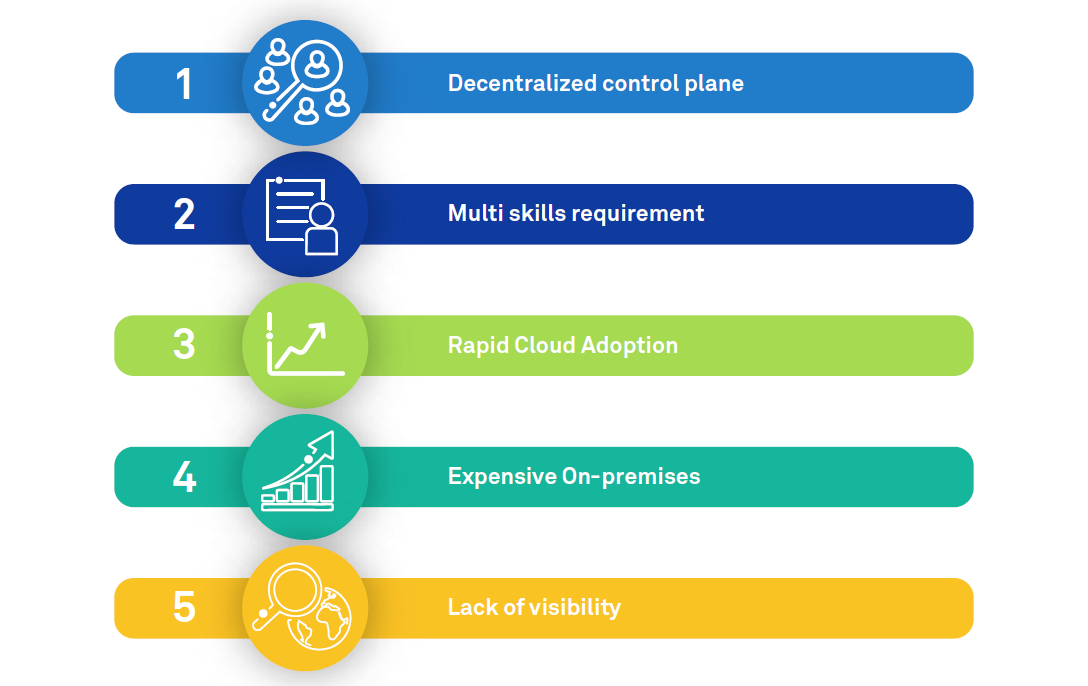 Considering the rate of cloud adoptions and the requirements for standardizing the policy and compliance, the need for extending SDN fabric across various clouds is of paramount importance. The methods described in the previous section aid in networking for cloud, however the policy enforcement is still decentralized and in silos.

SDN for hybrid cloud brings in the flexibility of consistent policy push across the clouds, both private and public from a central orchestrator, which is available in both on-premises and cloud model. The network components as part of the innovative solution have greater levels of integrations with cloud native components. This ensures no dependencies exist between the Cloud and Networking teams to achieve business goals.

The other important aspect of SDN for Hybrid cloud solution is that the customer can use connectivity mechanisms like Direct connect, Express route etc. for extending the management and control plane reachability beyond the datacenter boundaries.
Figure 4 describes the advantages SDN in hybrid cloud brings to the organization.

Typical components of SDN solution in hybrid cloud include SDN solution on premises with their respective cloud components which help in cloud connectivity and consistent policy push across the private and public clouds, apart from these an orchestrator/cloud management platform which aid in pushing the policies. Figure 5 depicts a typical SDN for hybrid cloud scenario. 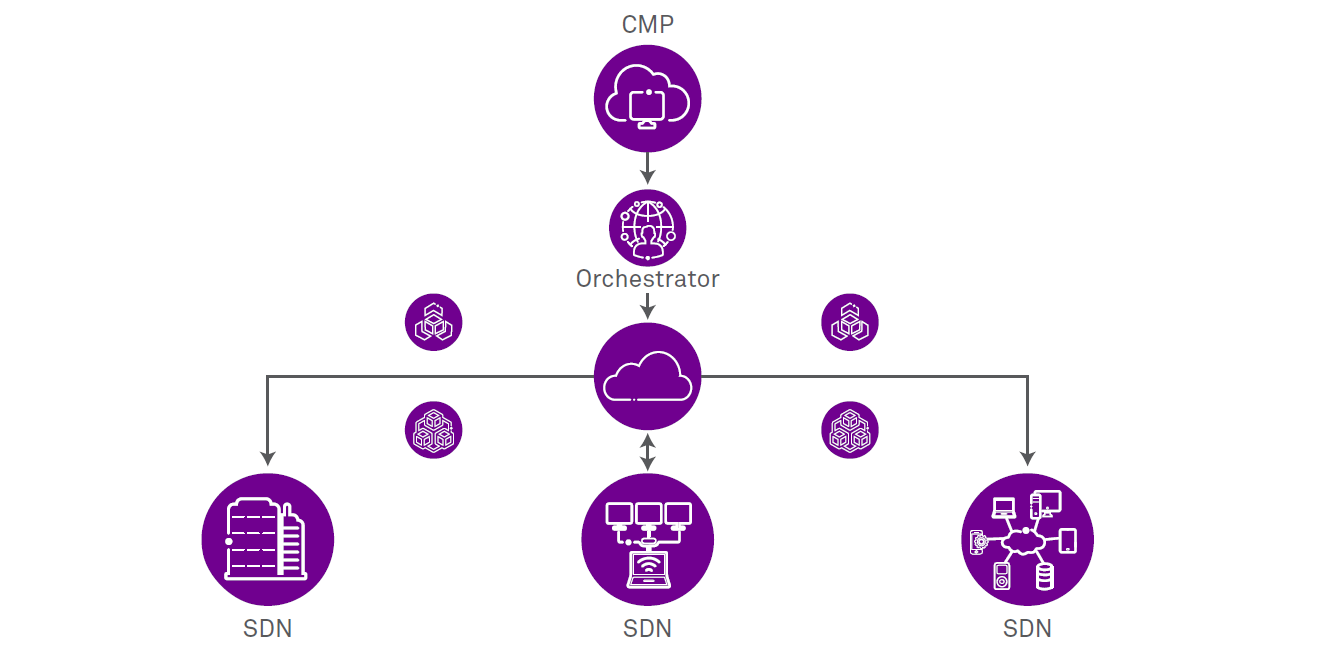 While hybrid cloud with SDN brings in many advantages, there are some associated constraints ranging from hardware dependency, security across diverse platforms, integration with applications, compatibility between on-premises and cloud platforms, and need for planning.

SDN for hybrid cloud has become the most critical aspect in an organizational digital journey. Precision planning with consulting approach is key to adopting the right SDN in a hybrid cloud environment considering numerous factors like security, application integration, and compatibility.

Organizations should embrace hybrid cloud with SDN to achieve speed, flexibility and agility for deploying and migrating applications between on-premises and various public clouds while on the path to achieve digital transformation.

Lalit has 13 years of experience in the field of information technology, networking infrastructure architecting, and technical delivery. He specializes in the field of software defined, traditional and Cloud networking. He leads a team of SDN solution architects, Cloud and OpenStack networking professionals, to shape the future of the SDN business for Wipro in global geographies. He holds multiple industry leading certifications, which include VMware and Juniper certifications. He can be reached at lalith.kameshwar@wipro.com 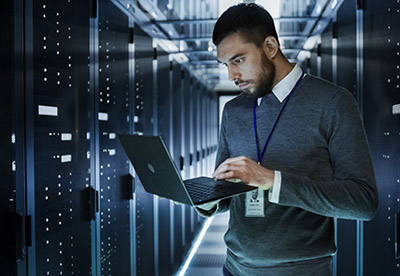 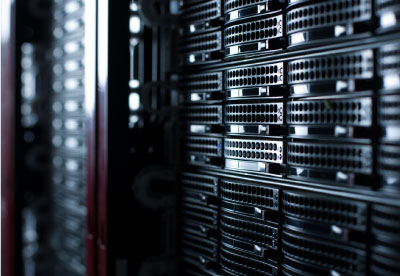