The Soft Machine I A Reimagination of our Collective Digital Future

The Soft Machine I A Reimagination of our Collective Digital Future

On May 21, 2020, the brightest minds of Alberta’s next economy will gather online to reimagine our collective future. We cordially invite you to join the discussion.

"The future and eternity are entirely different things." - Douglas Coupland

As Millennials contemplate being the first generation since the industrial revolution to have a lower standard of living than their parents, and Gen-X and late Boomers contemplate being less secure in retirement than the previous generation, the great intergenerational machine of wealth transfer that sustained increasing standards of living in western societies has slowed, and in many cases, reversed. Once almost a guarantee, the promise of getting a well-paying job and an affordable home after college seems closer to a utopian daydream than a practical five-year-plan for today’s younger generations.

This ongoing reversal of fortune challenges many of the key tenets of the market economy; homeownership and wealth generation through investment, as well as the tenets of the modern welfare state such as secure retirements and robust social programming. Each generation faces the seemingly herculean task of taking on the reins of business, government and social progress, though not many have faced the proposition of taking over a more unequal system.

An Amnesty International study of 10,000 18 to 25-year olds across 22 countries found that 41% of respondents chose climate change as their most important issue. That same study showed a lack of affordable housing and economic inequality as the next most important issues. This sensitivity to environmental and social issues indicates a stronger skepticism for institutional entrenchment and a unique appetite for change.

The Digital Age presents an opportunity that extends well beyond the development of new technologies built with the singular objective of advancing corporate profits and deep into the realm of solving humanity's most critical issues. Technological innovations can remove the barriers of cost, access, and exclusion that have prevented the vast majority of people from full and equal participation in our economy; and we, as Canadians, have a once in a generation opportunity to redefine our society with the objective of reconciling growth with equality, profits with people and privacy with security.

What side of the digital divide will you be on? 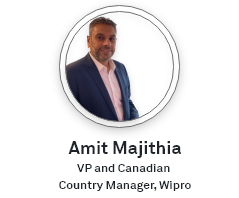