Internet of things (IoT) is the new way of communication between living and non-living things. IoT-based communication is relevant to any vertical segment - Healthcare, Automotive, Manufacturing, Industry 4.0, Retail, Transport etc. Adoption of this technology is very high across all vertical segments and increasing day by day. Today, smartphones play a very important role in the IoT-based communication ecosystem. The smartphone is practically the first IoT device that is readily available and used by millions across the world and this number is growing every day. Smartphones are mostly used to view and control IoT devices (non-living things) by the end user (a living thing), either directly or via IoT servers. But a smartphone with multiple built-in sensors like GPS, camera, accelerometer, gyroscope, proximity etc. and wireless communication technology - Wi-Fi, Bluetooth, RFID, NFC etc. can play a significant role in acting as an edge gateway. This will optimize the cost and adoptability of IoT technology among common people across the world.

The smartphone will add more value as a gateway with the collected data from edge IoT devices as well as from the user to make more intelligent decisions dynamically.

Why we need Universal IoT Gateway

The IoT Gateway plays a critical role to manage edge IoT sensors, and key responsibilities for gateways are

A smartphone can perform all these tasks and act as a universal gateway so that it will be easy to plug-in any IoT sensors to connect to the internet. The diagram below has this view 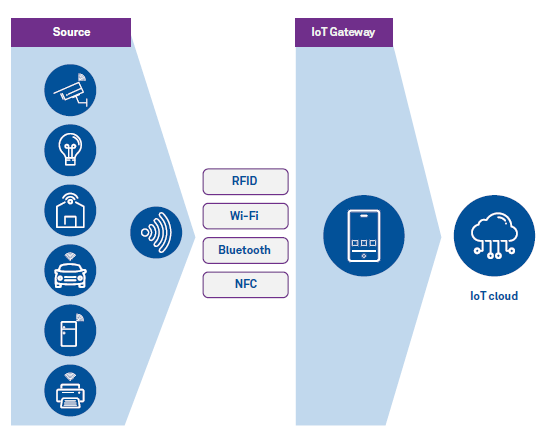 A downloadable Mobile application with plug-in based modular design can support plug-in / plug-out of any IoT sensors to connect / disconnect to/from the internet. 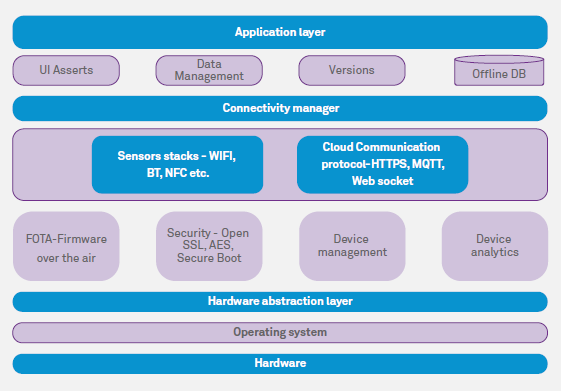 Application Layer of gateway application interacts and handles data exchange between sensors and gateway, as well as between gateway and cloud in an efficient, secure and responsive manner.

Connectivity Manager is responsible for seamless connectivity with the cloud and Sensors (Peripherals), as well as scenarios for reconnection, device state, heartbeat message, and gateway device authentication with the cloud.

FOTA updates module ensures that the IoT Gateway software and sensors are updated with the latest versions of - security patches, OS, and more.

Device Analytics module can be additionally built to manage the behavior of a user as well as a device.

Today, the IoT gateway market is managed by multiple proprietary gateway solutions. The end goal is to have a universal IoT gateway that can enable configuration-based easy, dynamic plug-in for any kind of IoT device. Smartphones can be used to make this Universal IoT gateway and that will increase the adoptability for common smartphone users.

Anupam is a Distinguished Member of Technical Staff and SME for the Industrial Engineering Team. He has architected the Digital transformation for multiple customers across the world. With close to 20 years of industry experience, his expertise has enabled the success of multiple programs and customer wins.