Requirements in the Cellular

Communication technologies have evolved rapidly over the past decade and the pace of change is only increasing. The latest trend today is the growth in volume of Internet of Things (IoT) and Machine-to-Machine (M2M) communications. The number of connected devices in the IoT/M2M industry could grow exponentially, putting unprecedented load on cellular infrastructure. To cope up with the rising demand, the 3GPP (3rd Generation Partnership Program) Standards body which standardizes cellular wireless (2G/3G/LTE) is looking to define new specifications for mobile networks. This paper talks about the challenges posed by IoT/M2M explosion and their consequences in the cellular ecosystem. We will also talk about how features in the 3GPP Release 10 and beyond will address these challenges.

Mobile technology has undergone massive changes since the introduction of digital 2G networks in the early nineties. Web support became a reality with the introduction of General Packet Radio System (GPRS) and fast Web browsing, and video calls were made possible by 3G networks.

With the adoption of Long Term Evolution (LTE), even high-definition video streaming has become practical. As data transfer costs fall and speeds increase, we believe that businesses will look to leverage these networks for more than just telephony and Web content. Already, the IoT/M2M ecosystem spans industries like healthcare, utilities (metering), automobiles, and so on.

According to a market intelligence company, the number of active wireless connected devices will rise to about 40 billion by 2020, more than double the current number. Many of the M2M devices currently use the GPRS module for connectivity. Such a cellular IoT has been practical so far because M2M devices needed relatively low data rates. Moreover, GPRS has enabled longer battery life and more reliable connectivity than 3G. However, as networks move from GSM to LTE technologies, M2M connectivity solutions will also have to change.

The global standards body, 3GPP, has been playing an active role in addressing these concerns. Efforts in this direction started with 3GPP Release 10, which introduced the Machine Type Communications (MTC) architecture. We think that it has been instrumental in providing standardized features and specifications for both cellular networks and M2M modules.

In order to assimilate a large number of devices, all stakeholders - device manufacturers, network operators, service providers, government agencies and regulators—need to agree on a broad set of requirements around the technologies involved.

Currently, we see to that if these are satisfied by both, proprietary solutions and the ones based on 3GPP standards. We have divided these into three broad categories based on the functions that they address - device requirements, network requirements and common requirements.

IoT services currently require low data transfer rates between device and application server and can run well with GPRS connectivity. However, data-intensive applications like video surveillance, emergency health services and automotive devices will function only with transfer rates of 3G or LTE networks.

Since LTE provides better spectral efficiency and flexible usage of bandwidth, we firmly believe that of the two technologies, LTE would be a better candidate for M2M modules due to its spectral efficiency, competitive cost and dynamic bandwidth allocation.

IoT devices usually have to run on extremely low power – much lower than typical LTE handhelds. Certain remote locations may even require the device to run for up to 10 years on the power output of a few AA batteries. It is critical for such devices to remain idle for prolonged periods. They should also be able to accept greater latency and longer gaps between transmissions. 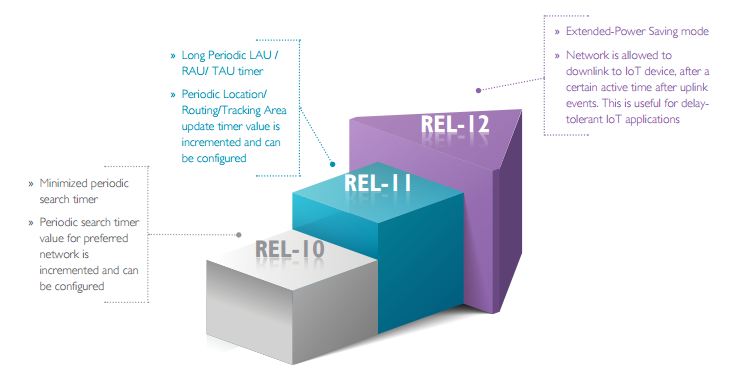 LTE modules are generally larger and more expensive than GPRS solutions. 3GPP Releases 12 and 13 already include LTE-MTC features that would bring down cost and size (refer Figure 2).

We are of the opinion that the LTE module can be further optimized by using 10-14 nanometer silicon technology, low speed memory (SDRAM) and slower processors. 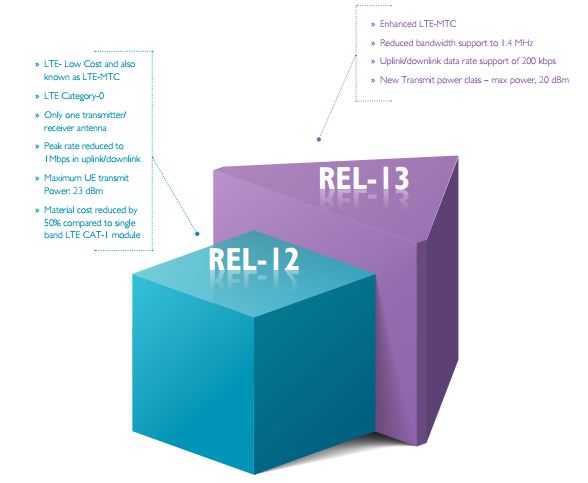 Figure 2: 3GPP Features Towards Reduction of Cost for LTE based 3GPP M2M Modules

Ease of Development and Integration

IoT devices must go through proper testing and approval processes to enable more efficient integration with the network and faster service deployment.

Such requirements should include:

Serious network congestion issues can arise when a large number of IoT devices try to connect to a network simultaneously. It could even lead to a domino effect if one network fails and the devices start attempting to connect to other available options. 3GPP Releases 10 and 11 (refer Figure 3) have several features intended to prevent overloading by conducting checks before even the device could connect to the network.

Our experience suggests that these features can be configured according to device types and can help control mobility-level congestions. 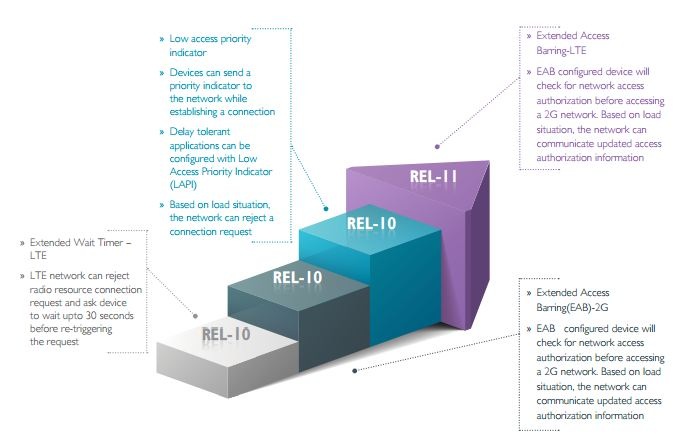 There can be situations where abnormal behavior of IoT devices could lead to network overload. Coping with such situations may be beyond the scope of 3GPP features but are crucial for establishing an efficient IoT ecosystem.

This can be achieved by continuously monitoring device behavior, diagnosing any problems at the network level, and disabling any faulty devices.

Scalability and Ease of Deployment

It is clear that there are challenges around deploying non-3GPP standard technologies and scaling them up to support all potential IoT/M2M services. Hence, cellular IoT will be the natural connectivity solution in the M2M landscape.

We have seen that most of the enhancements required to support IoT on existing networks are software based. This makes it much easier to expand the infrastructure as and when required.

A key requirement of IoT is efficient interworking between LTE and Wi-Fi connectivity. This is especially true for ensuring continuous connectivity for applications requiring mobility, like ambulance services. It also helps reduce the load on the LTE network and improves device power consumption. Such interworking features have been supported since Release 8, but have become much more sophisticated in Releases 10 through 12.

We would like to emphasize that these features require enhancements in all three aspects – edged M2M device, Wi-Fi network and LTE network. Releases 8, 10 and 12 have helped enhance interworking with Wi-Fi (refer Figure 4): 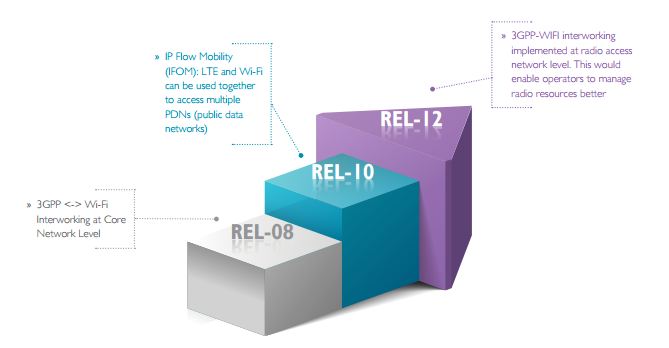 Although cellular networks have become ubiquitous, outages can be a major problem, particularly in remote areas and in space. One would do well to understand that to maintain contact with minimum manual intervention, network coverage should be increased and devices should have the ability to work in very low signal areas.

LTE networks are a natural choice for IoT applications but there are certain limitations to this approach. A major limitation is due to LTE band fragmentation across the world because it is very expensive to support several bands on a single device.

We understand that this leads to a cost-mobility trade off. M2M devices that have cost constraints cannot be equipped with multi-mode support and thus have to be limited to a certain region or country. Similarly, an application that involved mobility across nations would become much more expensive than a local device.

Where is the Cellular Ecosystem Headed?

We have seen that cellular IoT will be the preferred medium of connectivity in the M2M space as the number of devices increase rapidly. Both M2M modules and LTE networks must have the standard 3GPP features to ensure more efficient connectivity of handhelds as well as M2M devices.

We believe that M2M modules need to be updated and optimized to stay compatible with current and future cellular technologies. Similarly, the networks themselves should be designed while keeping M2M applications in mind. Inadequate implementation of 3GPP features on either side could become a major bottleneck for successful IoT deployment.

Mahendra Agarwal is an industry expert in the cellular wireless connectivity domain and currently works as an Architect in Wipro. He is a BITS Pilani alumni and has over 11 years of experience in the wireless telecom industry in 2G, 3G and LTE cellular modem software development for mobile devices.