In an increasingly globalized competitive world where margins are under constant pressure, supply chain optimization is critical. Much of the focus in designing supply chains in the last decade has been on the optimal use of resources, offshoring to cheaper locations, outsourcing non-value add activities, institutionalizing just-in-time systems and investing in communication technology.

While these new business paradigms have resulted in more efficient and responsive systems, the supply chain risk profile has been altered significantly. Many companies have been left vulnerable due to anemic risk mitigation systems, and these systems have yielded to major variations in demand or supply caused by unforeseeable events, both natural and man-made. Caught unaware by such disruptions, these companies have suffered losses of revenue, market share and consumer trust, and in some cases have even faced bankruptcy.

Supply Chain Disruptions Can Be Painful

In last year's Japan earthquake, tsunami and nuclear crisis, Toyota’s operations were affected to the extent that it took over six months before complete recovery was possible. The delay in the launch of two models caused an estimated production loss of over 140,000 vehicles, the company's profits fell by over 30% and it lost its position as the largest automaker in the world.

Of course, not all supply chain disruptions are caused by natural disasters. Cisco rode the technology wave in the 1990’s to become the market leader in the network component business, but it had no experience in managing downturns. When the tech bubble burst and demand slowed significantly, the company did not have the capability to track the inventory of products across its geographically-spread supply system. Their systems were designed for high responsiveness, which meant high inventory buffers. Lack of inventory tracking capability resulted in high inventory accumulation which in a bust market led to the eventual write-down of $2.2 billion in 2001 alone.

Broadly defined, a supply chain disruption is an unusual spike or steep fall in either demand or supply leading to a huge imbalance between the two. According to Jossi Sheffi, director of the MIT Center for Transportation and Logistics, "The essence of most disruptions is a reduction in capacity and hence inability to meet demand." Companies cannot afford to treat supply chain disasters as 'black swan' events that have a negligible chance of happening.

Recent studies suggest that less than 25 percent of Fortune 500 companies are prepared to handle a supply chain crisis and that a $50 million to $100 million cost impact can be incurred for each day a company’s supply chain network is disrupted. (Alpaslan, April 2003) As part of a research study on supply chain risk and its impact on equity volatility, Prof.Vinod Singhal and Kevin Hendricks concluded that it could take two years or more for companies to recover from a major supply chain failure. (Hendricks, 2003)

What is a Resilient Supply Chain?

As illustrated in Exhibit 1, disruptions happen for various reasons and the nature of their impact also varies. For example, a labor union problem can be anticipated whereas a terrorist attack is unforeseeable. Also, the time taken for the impact to be felt differs and is unique to each disruption and to each company. For instance, a fire in a factory can potentially halt operations immediately, whereas the outbreak of an epidemic in a supply zone could have a more subtle impact and will take more time to set in. Companies with a resilient supply chain will be able to anticipate these events better than their peers, and will be able to delay and minimize the impact of the disruption by taking proactive risk-mitigating steps.

Following the September 11, 2001 tragedy, U.S. flags, lapel pins and other patriotic objects became extremely popular, but consumers had a difficult time finding them in major retailers like Kmart and Target. That's because Wal-Mart, using its real-time demand tracking and analysis system, responded swiftly to the situation by locking up all the supply resources they could find. 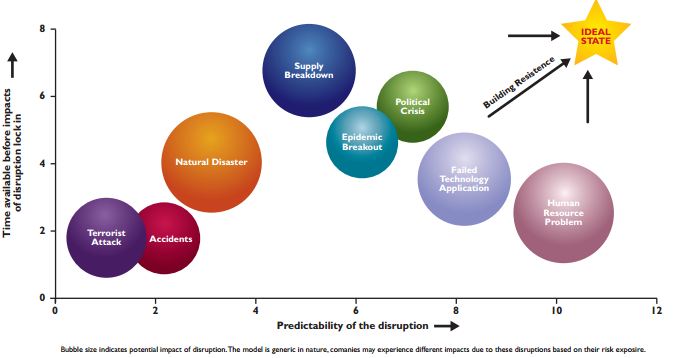 Wal-Mart is not the only retailer that knows how to benefit from external supply chain disruptions. Zara, a Spanish clothing retailer, had black clothes on its shelves immediately after the 9/11 events. While the normal lead-time in the garment business is 90 days, Zara was agile enough to assess a market need and respond within five days. Why do some companies do better than others in times of disruption? The answer lies in their ability to detect the disruption and swiftly act on it. While these events cannot be predicted with precise accuracy, their major impacts can be narrowed down to one of five areas:

While companies focus on efficiency and responsiveness in traditional "business-as-usual" environments, they should be flexible enough to quickly switch their operation scenarios to adjust for disruptions. A scenario-based strategy for disaster proofing with the focus on impacts of disruptions will not only minimize damage to the bottom line but can potentially help score over debilitated competitors.This is illustrated in Exhibit 2:

In Exhibit 2, company B has instituionalized a Business Continuity Plan (BCP) and invested in visibility systems for early detection of disruptions, whereas company A has not. When a disruption occurs at point T, Company B is able to discover it at point B1 and recover from the disruption rapidly, minimizing the impact of the disruption. Company A detects the disruption only at point A1 and takes a longer time for recovery.

Philips was a major supplier of semiconductors to Nokia and Ericsson in 2000 when a fire at a chip plant in Albuquerque destroyed chips for millions of cell phones.When Nokia learned about the incident, they immediately set up a troubleshooting team to assess the full impact of the incident and find alternatives.They rapidly sourced three of the five affected chips from within their existing supplier network with a five-day lead

time. A senior management team from Nokia worked out a deal with Philips to use the latter’s capacities in other plants for sourcing the remaining two parts.With these efforts, Nokia was able to make all customer shipments in time.

In contrast, Ericsson took several weeks to respond to the situation, and by that time most of the market capacity had already been allocated to Nokia.The impact was devastating for Ericsson, which took a $2.34 billion loss in its mobile phone division, citing not only component shortages, but a poor product mix and marketing failures.

As shown in Exhibit 2, risk mitigation efforts can be classified in three phases:

While the strategic vision must take a top-down trajectory, the operational activities need to be implemented from the bottom-up. Based on the efforts required before, during and after the disruption, Exhibit 3 presents a comprehensive framework to build a resilient supply chain: 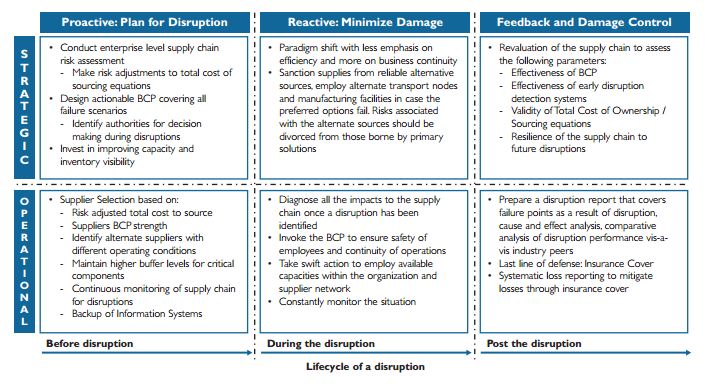 The frequency and severity of supply chain disruptions has increased tremendously in the past two decades of globalization.While investing in supply chain risk management comes at a cost, it is offset by reduced insurance premiums. Besides, companies that have taken steps to mitigate the adverse impacts of a disruption have been able to contain their damages and in some cases have learned to benefit from them.A resilient, flexible, scenario-based supply chain provides a competitive edge during times of major disruptions and is not a choice – instead, it is a business imperative for "best in class" companies.

The authors wish to thank Ms. Charlotte Staf for her creative inputs in designing the frameworks used in this article.