A Practical Approach to

Post-merger integration (PMI) is rarely straightforward, but the approaches most businesses take have made it slower, less effective, and more expensive than it needs to be.This may help explain why, in study after study, so many deals fail to deliver their expected value.

The irony is that massive investments of money and time go into most deals. Why, then, do they so often fall flat? In our experience it's because it is much easier to develop the investment thesis justifying a deal than to create a workable plan to transform two companies into one. Even the most well reasoned strategy, thoroughly vetted target, and comprehensive financial model are of little value if you cannot integrate quickly and effectively.

The good news is there is a solution. We have seen that structuring decisions up front about how the newly combined businesses will operate makes it much likelier that an M&A deal will deliver the envisioned shareholder value.

The Certainty of Uncertainty

It would be easy to attribute the failure of past deals to the natural uncertainty that accompanies M&A, as many textbooks do. But such an explanation seems like the pronouncements of armchair quarterbacks who've never really managed a PMI team. Uncertainty is absolutely relevant, but it is also surmountable if you understand its dynamics: it is not a matter of knowing enough, but rather a matter of timing.

As soon as a deal is announced, external stakeholders react. Markets immediately pronounce their judgments through share-price movements. Customers and trading partners wonder about possible near-term disruptions and the longerterm implications of the deal. Competitors begin to whisper in the ears of both firms’ key customers, hoping to poach a few in the wake of disruption.

Meanwhile, internally, and at the worst possible moment, the deal becomes a source of gossip and distraction. Precisely when the rest of the market needs reassurance, employees have astrong urge to look inward. They wonder about new bosses, new budgets, new policies, job security, and a host of other important issues.We believe it is this misalignment of focus at the most inopportune moment that often causes M&A value to dissipate, even more than a lack of good strategy or thorough due diligence.

The Siren Song of "Discovernance"

Many, if not most, companies try to overcome uncertainty with process, money, and effort. They employ exhaustive process discovery and elaborate program management governance—a one-two punch we have termed "discovernance."

In the absence of clear decision-making authority and accountability, many integration teams focus instead on strict adherence to the PMI process as provided to them by their advisors. Unfortunately, this is a poor replacement for the decision-making that actually fuels integration. All it does is aggregate the complexity of how things operate today.

We typically ask clients the following question: "What decisions will you be making during the integration team’s kick-off meeting?" Usually, the answer sounds something like this: "Understanding the PMI process taxonomy and methodology, ensuring fully-representative team composition, establishing the template to be used for reporting the team’s activities, and mapping all possible stakeholders from whom the team will need to seek input." All are important things to understand, but in and of themselves they do not help you actually do anything.

Rather than cataloguing the complexity of today, what is really needed is a clearer understanding how things will run tomorrow. This would serve the dual purpose of resolving employee uncertainty and improving signals to outside stakeholders.

In order to do this, integration planning and execution should be driven by how the newly combined company will operate. Therefore, the paramount activity must be to make the foundational decisions that will define this future operating model. Everything else—especially process and governance— exists to enable this goal. 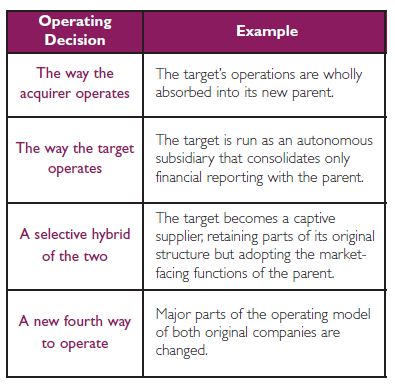 The Value Chain Gang: Structured Decision-Making in a Large Deal

A high-tech manufacturing client had successfully completed numerous small acquisitions but was struggling with a recent large deal. Unlike smaller companies, the larger target could not simply be swallowed into the client’s existing business model. Integration teams quickly found themselves in the weeds trying to solve for numerous complexities simultaneously. Using a value-chain structure, the decision-centric approach disaggregated the client's acquisition into its operational piece parts. Each part contained a decision tree for senior leaders to complete: 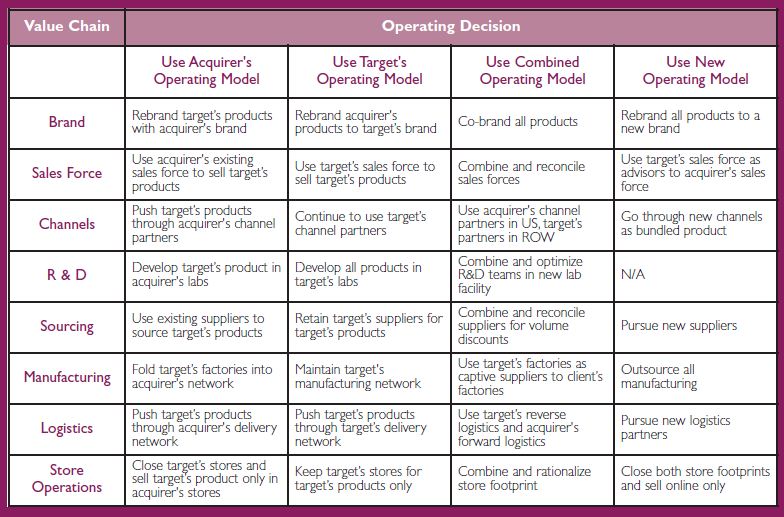 Completed decisions were highly effective for detecting underlying integration risks. Where the target’s operating practices were preferred, new capabilities had to be developed and milestones extended. Where leaders designated two strategies, as they did for two geographic markets, integration teams were able to request additional resources. It also highlighted delays due to decisions that had not yet been made.

In the course of one afternoon, a group of Senior Managers were able to make "80%-right" decisions that framed the rest of the integration. The decision-centric approach reached beyond just this integration. Many operating decisions led to a richer understanding of the capabilities and weaknesses of their operating model, and shaped future integration that could be standardized for future use.The client was able to achieve repeatability, scalability, and time-to-market reduction in future planning.

In non-textbook integrations, managers face many smaller, more complicated variations of the same choices.We advise clients to start by structuring these decisions in an end-to-end, value chain view as soon as possible. (see sidebar, The Value Chain Gang). This allows them to cluster decisions appropriately, facilitating comparisons between similar functions at both companies, even if the target’s business model is vastly different. Each value chain step represents a tree of operating decisions—starting broadly and becoming increasingly specific—that must be made for the new company.

We find this early decision making exercise is most productive when it involves only a handful of pivotal client managers. Optimally, they are seasoned, upper-mid-level operating managers—the people who know the most about how things actually get done. We have facilitated such knowledgeable groups tackle as much as 80 percent of key decisions in a single afternoon. As they begin working their way through decisions, the group quickly finds that what may have appeared at first to be a tall challenge reduces itself to a series of discrete choices about a finite list of topics, many of which they have considered before in different contexts.

Participants should see up-front decision making as an opportunity to map out a preliminary integration path, defining it by the many decisions that could add friction to the process—over time, in both companies, and within and across functional areas. Decision sessions should focus on identifying potential bottlenecks where integration is likely to take longer, cost more, drive higher risks, or stumble over legacy business processes in need of reengineering.

Together, these early decisions form a straw man operating model that actually provides direction. Managers can now tap their staffs to generate targeted analyses that inform specific decisions. Of course, there will be some genuinely thorny decisions that require complex problem solving and iterations to identify the optimal solution. But unlike the "discovernance" approach, in which such analyses are not clearly tied back to a specific purpose, the decision-centric approach harnesses the intellectual horsepower of integration teams to drive toward choosing the future operating model that best delivers value.

In the many instances where preliminary decisions have been made, the path is clear and integration can begin.Where doubts remain or bottlenecks exist, governance committees now have a purpose: to oversee and resolve the complexity delaying integration. Perhaps most importantly, clearer goals allow managers to make more accurate financial and resource projections well in advance of the need.

To be sure, post-merger integration will never be trivial. But we believe our approach can increase your chances of success. By emphasizing top-down accountability for key business operating decisions early in the process, you can reduce uncertainty and focus integration teams on the work that really matters: getting the combined company back at full stride, competing in the marketplace.

Kris Denton heads Strategy & Transformation Consulting at Wipro. He is reachable at kris.denton@wipro.com.