Why did they fail? Aside from having over-leveraged debt (another common trend) these stores shared two big problems that prevented them from succeeding: 1. The few omni-services they offered were underfunded, poorly executed, and frustrated shoppers attempting to use them, and 2. The back-end systems in place were also under funded, poorly executed, and frustrated store and headquarters personnel attempting to use them.

In this Targeted Research report we examine the specific technologies and strategies needed to create smart, omnichannel stores that match tech-savvy, time-crunched lifestyles of modern shoppers.

Just a small minority of retailers (19%) say other key factors are more important than adopting a smart, store-of-the-future strategy.

However, technology alone is not the answer. Store associates also play a big role, according to 88% of retailers. This figure includes 52% who say store associates are critical to achieving success with a smart, store-of-the-future strategy, 27% who say it is a major factor, and 9% who say it is somewhat important. (See Figure 2.)

Again, just a small minority (12%) of retailers say the role of store associates is minimally important.

And while a smart, store-of-the-future strategy is considered to be overwhelmingly important it is also true that most retailers do not actually deliver it. When asked to evaluate their company’s ability to deliver a smart, store-of-the-future experience retailers rate their performance as middling, scoring just 5.5 on a 1-10 scale where one is the lowest rating and 10 the highest. (See Figure 3.)

It is not surprising that retailers consider themselves to be lagging behind in store-of-the future execution because of the 80-20 rule.

In this case, 20% refers to the small group of leading retailers that are achieving record sales and profits from their smart store investments and the lagging group (the bottom 80%) are struggling because of their omnichannel services are under-funded and poorly executed.

Retailers that belong in the leading group include Walmart, Target, Best Buy, Lululemon and Nike, all of which are soundly beating Wall Street expectations.

The top three customer-facing technologies that retailers say are important to delivering a smart, store-of-the-future experience are: click and collect (85%), proximity or location engagement in stores (64%), and buy online and return in store (55%). (See Figure 4.) 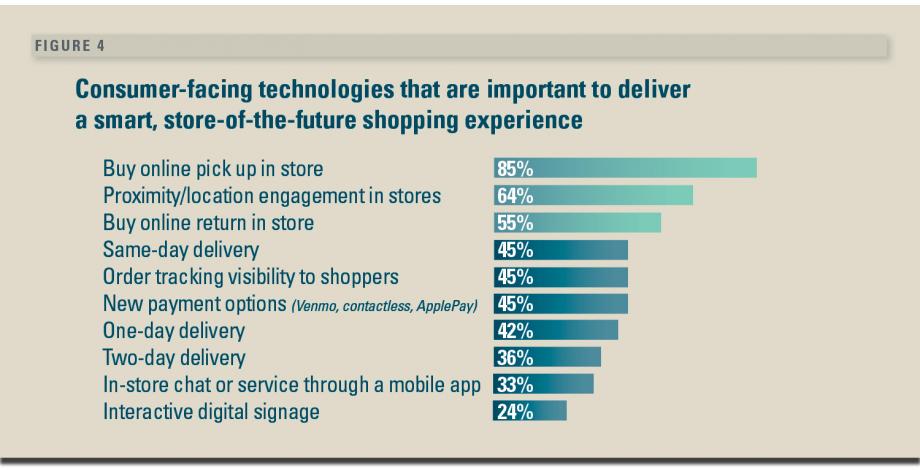 To find out how retailers plan to convert old-school stores into omnichannel stores-of-the-future we asked about buying plans for implementing key shopper-facing technologies. (See Figure 5.) 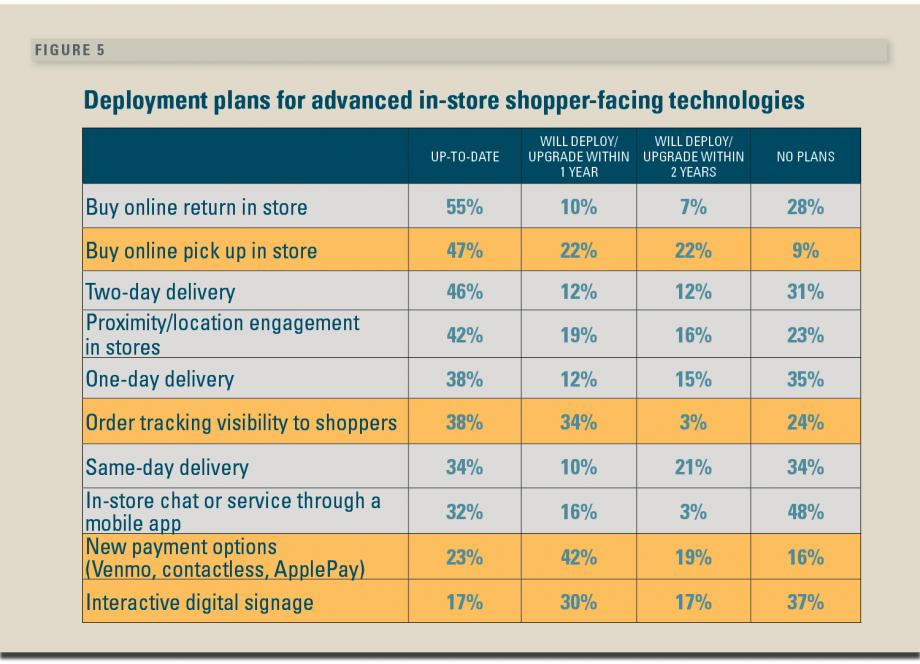 When combining investment plans, the top three shopper-facing technologies where dollars will flow in the next two years are: new payment options (62%), interactive digital signage (47%), and click-and-collect (44%).

When asked to cut to the chase, retailers identify three high-level consumer strategies that rise far above the rest: service (88%), convenience (73%), and value (67%). (See Figure 6.)

Deliver these three consumer-facing strategies profitably and success is guaranteed for your stores. Other strategies are important, too, depending on your retail niche, but nothing comes close to beating the top three. 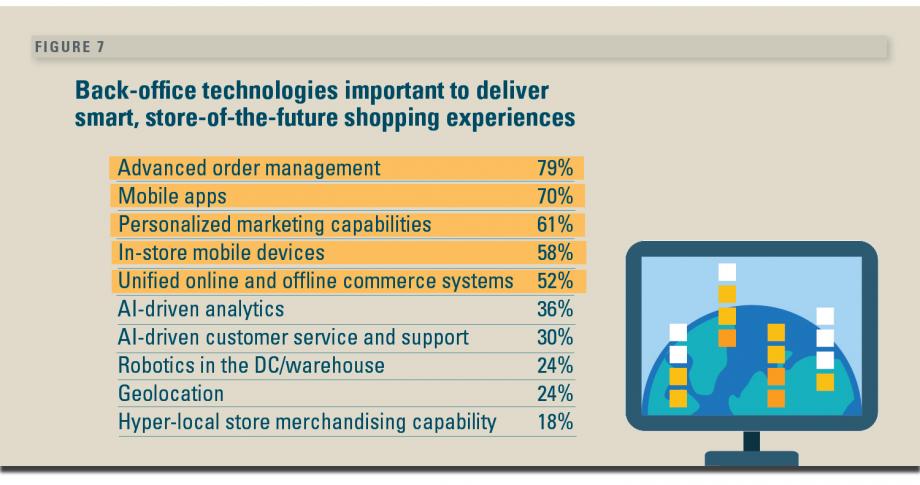 In the second tier are AI-driven analytics (36%) and AI-driven customer service and support (30%). 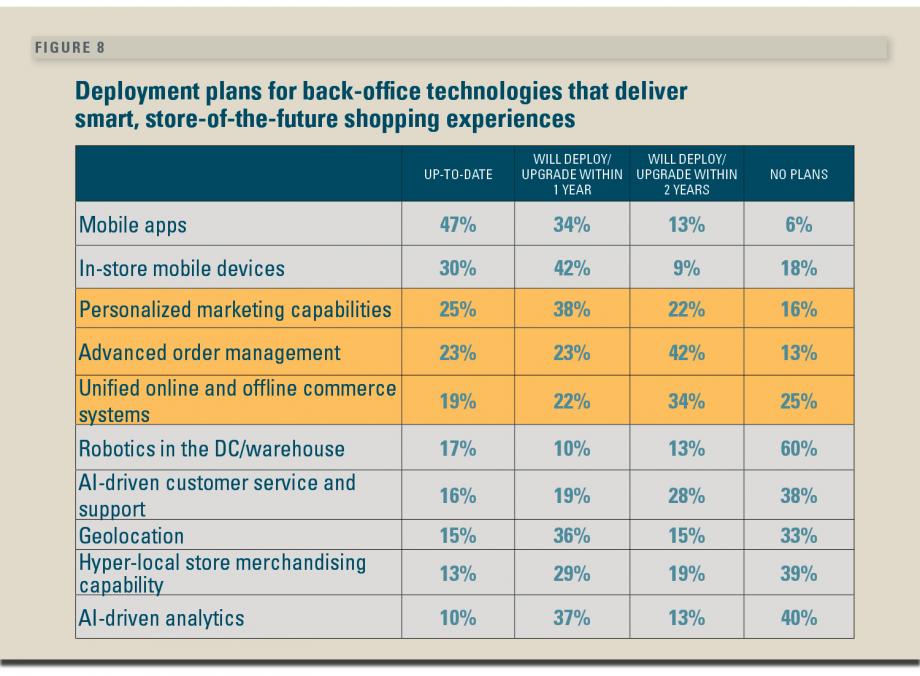 In 2021, the top back-office technologies for investment include: advanced order management (42%), unified online and offline commerce systems (34%), and AI-driven customer service and support (28%).

When combining implementation plans, the top three back-office technologies where dollars will flow in the next two years are: advanced order management (65%), personalized marketing capabilities (60%), and unified online and offline commerce systems (56%).

These are exceedingly large numbers for retailer investment plans compared to other technologies in the retailer tech stack, which indicates a high level of importance is placed on them as essential tools for long-term success.

Although retailers prefer to make IT investments in orderly, forward-looking budget plans, they also keep their eyes open to emerging technologies that appear without warning. One of the most recent disruptive technologies to enter the retail marketplace debuted in the Amazon Go store – scan-and-go checkout. (See Figure 9.) 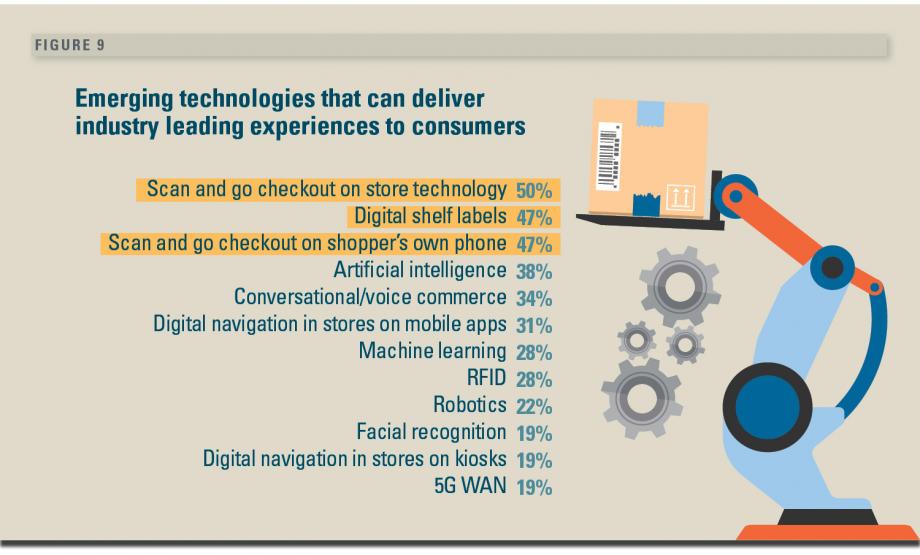 Still a work in progress, scan-and-go checkout on the retailer’s own device topped the list of emerging technologies that retailers believe can deliver industry-leading customer experiences. It was chosen by 50% of retailers. Tied for second on the emerging tech list are digital shelf labels (47%) and scan-and-go-checkout on the shopper’s own phone (47%).

In the second tier of emerging technologies that can deliver industry-leading experiences to consumers are: artificial intelligence (38%), conversational/voice commerce (34%), and digital navigation in stores on mobile apps (31%).

One trend sweeping a big part of the marketplace is health and wellness, which touches all shopper lives and therefore all retailers. Do stores that feature video game products, for example, have a high interest in the health-and-wellness trend? Maybe not. (See Figure 10.)

However, perhaps they should reconsider their stance on health and wellness in light of the recent negative stories in the media about obsessive game playing and sedentary lifestyles. Looked at it from this wider perspective, every retailers should care about consumer health and wellness.

Overall, we find that 66% of retailers (including all retail segments) believe the health-and-wellness trend is important to their company’s business. This breaks out as 18% extremely important (decisive), 27% important (a major factor, and 21% somewhat important (as important as other factors).

This study was conducted during the month of November and only senior executives from national or large regional retailers were invited to participate. The results do not include any store-level, field-level or regional employees. Only headquarters-level staff responses were included. (See Figures 11-13.) 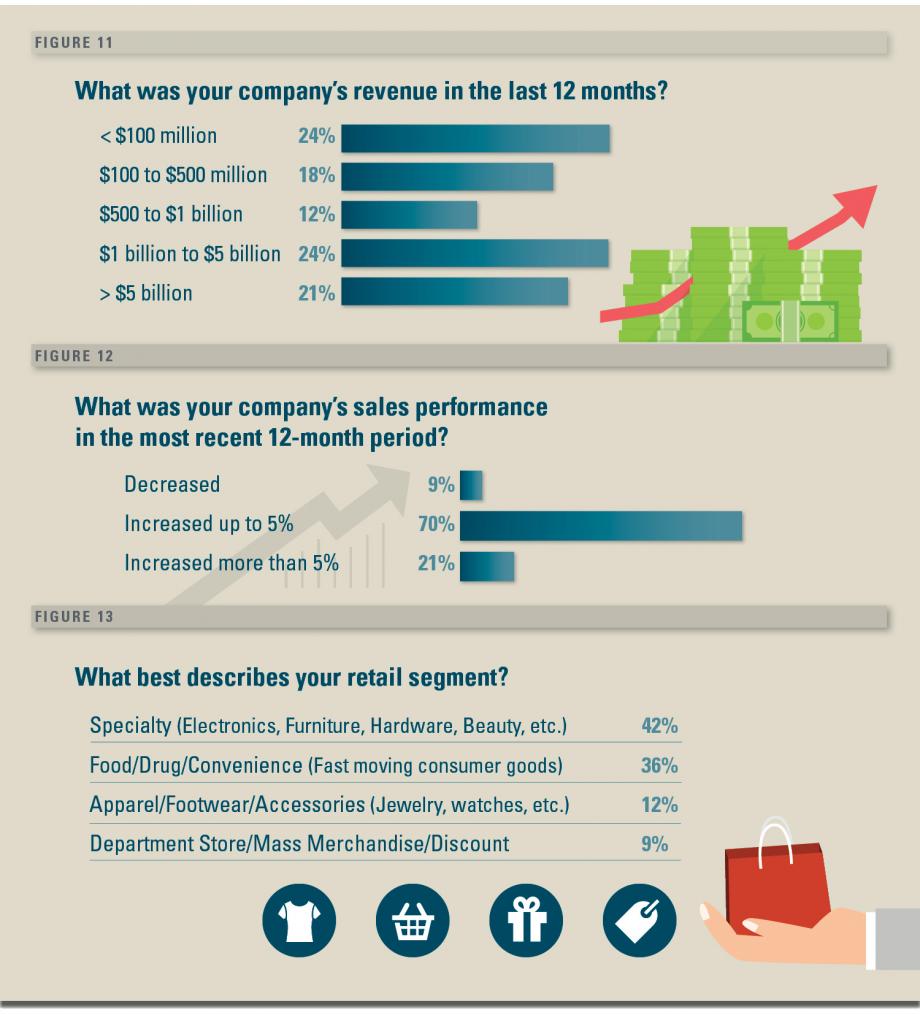 It is clear from the data that retailers that adopt a smart, store-of-the-future strategy and execute it effectively will succeed in today’s competitive retail marketplace, a finding backed up by 81% of retailers.

It is also clear that store associates will play a big role in making advanced technology investments a success with shoppers, according to 88% of retailers.

However, it is also true most retailers do not actually deliver a smart, store-of-the-future experience. When asked, retailers give themselves a middling 5.5 grade on a 1-10 scale.

Technology alone will not guarantee success with shoppers and produce stellar financial results in stores. For that, retailers must deliver three things: great service, effortless convenience, and outstanding value.