With the proliferation of AI-based systems in almost every application, the focus has shifted to getting a better insight on their working mechanism. This can be best explained by the example of an autonomous vehicle (where the decisions on various maneuvers have to be taken in a split second), such as while in the midst of “not so friendly” traffic, it has to find a place to squeeze in and move forward.

In another example, an AI-controlled Clinical Decision Support System (CDSS) analyzes PET/CT images and associated data, and takes a call on the staging of a patient’s cancer. The staging, in turn, dictates the therapy regimen that the patent must undergo.

Numerous such examples have forced the European Union to enact a law on the “right for explanation” that was enforced in May 2018. The law requires the providers of AI solutions to explain their reasoning behind outcomes. This can be best explained with an illustration: If the AI is presented with the image, as seen in Figure 1, the concluding solution should be able to reason out why a cat has been classified as a tiger and not as a cat. 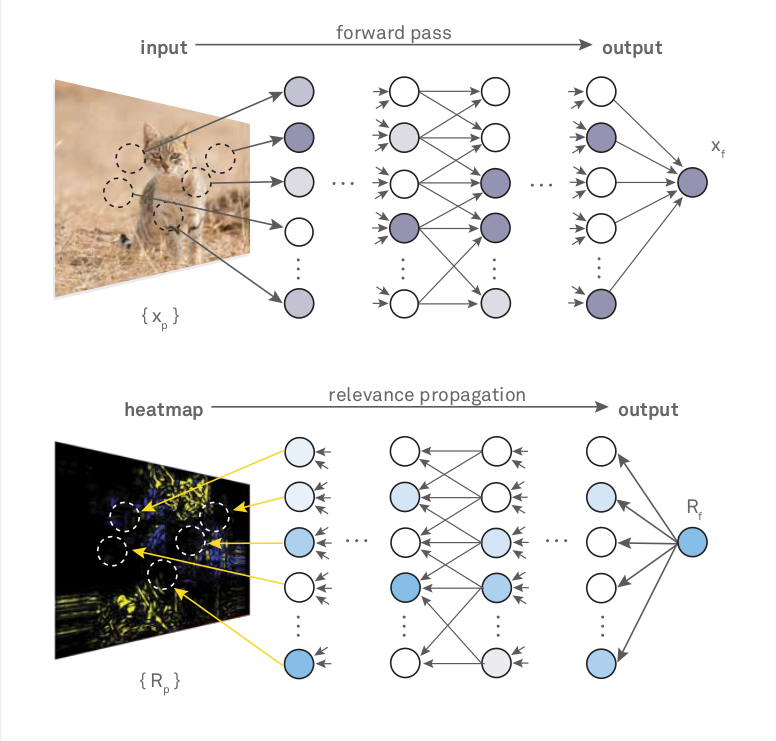 1. Explainable AI for the image data

In an image data explanation, the explainable AI system has two components: one, to identify the features of the input that results in the said response, and then puts the explanation into words; the second one which opens up the black box model.

The heatmap provides visual depiction of the relevance of a feature in the decision making. In an image classifier, it represents the contribution of the pixels towards a class. The common techniques include:

Figure 2: Fighter plane image and the heatmap from the second classifier

Visualization of the model

A classifier model in general, is a black box. The tools Deepvis, RNNvis and LSTMvis help to visualize and interactively plot the activation relevance produced in each layer of the classifier. It also depicts the learnings of each neuron.

Explaining predictions made by models in the textual domain is tricky as textual input is transferred to the models in the form of embeddings. These embeddings are obtained by 4 projecting textual units in a vector space of low dimension. The concepts of relevance and heatmap for images have been explained previously. The same is true for text as well. The difference is that, in the case of text, the unit used for mapping the relevance is a textual unit which, in most cases, is a word.

For obtaining wordwise relevance in a chunk of input text for predictions made by the text classification model, the LRP and sensitivity analysis algorithms, as explained above, are primarily used. However, the usage is in the context of words in the text.

The explanation provided by the framework can be used for a variety of applications such as debugging, test case designs and optimal designing of the system.

She is a gold medalist in engineering from Jadavpur University, a DFID scholar at the University of Strathclyde, and a PhD in AI.

Vinutha heads the CTO research team focusing mainly on the cognitive space. She has more than 27 years' experience in the software industry, out of which she has spent two decades at Wipro. She has worked extensively in embedded domain areas ranging from device drivers, networking, storage and printers, in various customer engagements.

Her main areas of focus are Artificial Intelligence, machine learning and deep learning. She was one of the key members that pioneered Wipro HOLMES TM – Wipro’s AI platform.