Unless you had been completely locked out or have unplugged yourself over the past year, it is impossible that you would have missed out the noise around Blockchain. So what is a Blockchain? Blockchain is a new technology that has become mainstream in the financial services world. It is a distributed ledger where transactions are verified and securely stored in a network. While it is similar to a database or a shared excel sheet, it has certain unique attributes that differentiates it from traditional databases that we have seen and used in the past.

A lot has been written about the significance and potential of blockchain. For instance, listen to this quick run down by Blythe Masters, CEO of Digital Asset Holding on the meaning of Blockchain. The hype around Blockchain is not without a reason. Financial institutions which were weary of the Bitcoin has embraced Blockchain - the underpinning technology of Bitcoin - with open arms. This is clearly evident from the venture capitalists’ investments in Bitcoin/ Blockchain technologies.

Additionally, interest levels are so high that every problem is being viewed through the Blockchain lens. Going by Google trends, year 2015 was just the beginning. However, 2016 has started with a bang with significant uptick on the number of transactions conducted on Blockchain 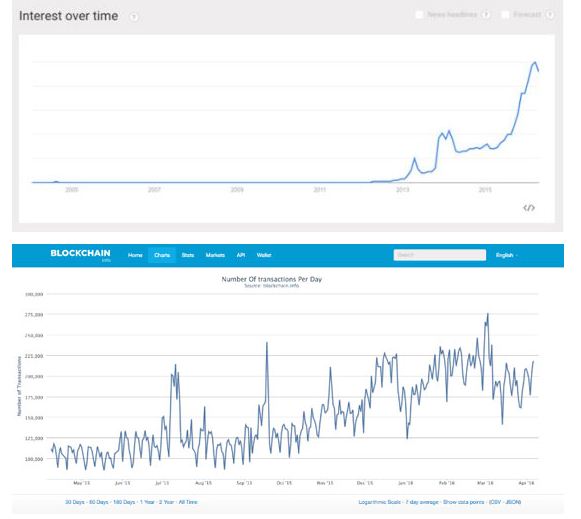 Many in the Financial services industry, despite having deep interest and having invested in startups and consortiums have started to realize that Blockchain is not going to be enterprise ready any sooner. Certainly it is not a silver bullet either.

For instance, Citi - having invested in Chain.com which is one of the earliest Blockchain startup - has rightly pointed out in its recent Global Perspectives & Solutions report on Digital Disruption that Blockchain is a cost-play for Financial institutions in the long run and its prime time is still ways off. However, Blythe Masters of Digital Asset Holdings is confident that this technology would be a reality in Banks within two years.

Initiatives such as the R3 Consortium, Hyperledger etc. are certainly a step in the right direction. Banks are continuing to experiment on Blockchain and pilot use cases through their innovation teams. There exists an ever growing and contributing Open Source community that is vibrant and is going the extra mile to ensure that this technology doesn't go the Bitcoin way. They are striving to ensure that issues of security, scalability, governance etc. are getting addressed to make Blockchain enterprise ready through their rapid release cycles.

We can also expect a bigger play coming in from the system integrators pretty soon. Infrastructure providers like Microsoft have taken a lead by positioning Azure as a platform for providing Blockchain-as-a-Service. Microsoft has on-boarded a broad array of providers on its Azure platform with the recent one being the famous R3 consortium.

Few of the recent developments in this space are:

Therefore, points to ponder are the following:

Whichever way it goes, Blockchain is definitely a technology that has the potential to disrupt several things around us. So do you work on anything exciting using Blockchain? Has your organization ever tried or willing to look into this disruptive technology?

Share your views, thoughts and feedback in the comments section below.

Ramesh Babu is a seasoned executive with 20+ years of experience in Data Analytics. In his current role as FS Analytics Practice Head for Banking in the Products & Solutions Group, his focus is on the cross walk between strategy and delivery of value through power of data analytics. Previously, he was the Head of Sales (Banking) for Analytics & IM service line in the US. He has significant experience in driving scalable growth by leveraging the power of data analytics and has managed the all the aspects of the data analytics value chain.