In Praise of Irrationality

We have all grown up in a world that clearly values rationality and rational behavior. Being emotional was frowned upon. Whenever someone displays emotions in public, it makes news (Think of Maradona's expressions as the team played and lost) and the world turns its cameras to look at the person who just "lost it". When I studied Science in school, I was told by my teacher that if there was something that cannot be explained by Science it was not worth knowing and that it was obviously irrational. Such was the vehemence with which I was nudged towards being rational. As I grew to develop my own view of the world, I got fascinated by the limitations of rationality. Rational stuff had a logical sequence and clearly activated that part of my brain that I had difficulty accessing.

You try this one and you got to do this real quick: A bat and a ball cost $1.10 in total. The bat costs a dollar more than the ball. How much does the ball cost?

Write down your answer. If you said that the ball costs 10c, then you are part of the majority. That is the good news. The bad news is that the correct answer is 5c. Shane Frederick, Prof at MIT Sloan posed this question to more than 3,000 students at eight different universities. Fewer than half gave the correct answer. The trick is to not go by your instinct which gives the wrong answer, but to take a second more and reflect on it. Shane has developed a 3 question test – that question is one of the three – that can be almost as accurate in predicting characteristics than other tests like the SAT, ACT, or the Wonderlic Personnel Test. He also found that those who do well on the cognitive reflection test tend to be more patient in decisions between smaller sooner rewards and larger later rewards. Before you pat yourself on the back (your own or anybody else's for that matter) remember, they are also more willing to gamble in financial domains.

Now let us check the other half of your ability. Try saying the words in the visual below. 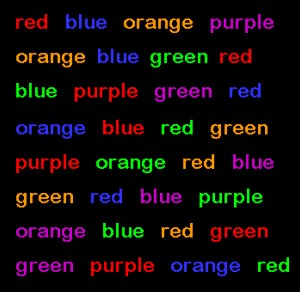 The top line would read red, blue, orange purple. That is easy. The task is to quickly name not the word itself, but the color of the word. As an example, for the word "green" printed in red ink, the correct verbal answer is "red." Because of a phenomenon called directed attention, this is hilariously difficult to do. You must actively inhibit the automatic response—reading the word—in order to do something else. This is not the only way in which we can understand the power of the irrational. There are many examples that have been done to show how we all do dumb and irrational things despite taking pride in our rational selves.

Take for instance Stanley Milgram's famous experiment. How far would you go giving what you thought were electrical shocks to another human being simply for a study about memory? What would you think when the learner went quiet after you apparently administered a shock labeled on the board "Danger: Severe Shock"? How far would you go? The majority, at least 63% of the participants, continued right until the end – they administered all the shocks even with the learner screaming in agony, begging to stop and eventually falling silent. These weren't specially selected sadists, these were ordinary people like you and me who had volunteered for a psychology study.

My hypothesis is that you need to learn to develop the irrational – also known as the "creative" aspects of you. Writing a story is a good way to develop your irrational self. Stories are boring when they are straightforward and predictable. For instance try this for a rational (aka BORING as hell) opening line of a short story.

A boy and a girl sat on the same bench in the Physics class. The Professor was teaching (what else) Physics. The boy and the girl were trying to think of what the possible question paper would be like…

Now try this one on.

A boy and a girl sat on the same bench in the Physics class. While the Professor was teaching Physics, the girl's mind wandered. She was thinking of options. What protection should she use when the boy would meet her that evening. Would it be better to carry a small revolver or should she just use the sharp kitchen knife, she wondered. The boy was telling himself, "If only I had known that she was vegetarian, I would not have poisoned the fish…"

The best storytellers are magicians who use the same principles of psychology to lead the reader to a path that is perfectly rational and logical, but wrong. The purpose of every story is to coax the reader into suspending their disbelief. Good cinema does the same. See how much more interesting a life you would lead if you stopped resisting the irrational aspects of human beings. For instance, if you knew that groups fail to share information with each other that is known only to themselves and simply repeated what others already knew, you would put less faith in decisions made by the group. People are seen as more capable when they talk about shared rather than unshared information. To be on the safe side people prefer to stick to repeating things that everyone knows and, bizarrely, others like them better for it. Heck!! I am not suggesting that you drop all opportunities to be rational. Merely suggesting that the next time you do something irrational, maybe there is an opportunity for you to learn about stuff most people have learnt to ignore. For instance, by knowing about the 7 Psychological Principles of Scams you can protect yourself from scams that make 3.2 million people each year in the UK hand over £3.5 billion to scamsters.

If you like to try more tests that check for cognitive skills, try a logic and reasoning skill test here.

Or this interesting piece on Ten Social Psychology Studies.

Abhijit Bhaduri works as the Chief Learning Officer for the Wipro group. He lives in Bangalore, India. Prior to this he led HR teams at Microsoft, PepsiCo, Colgate and Tata Steel and worked in India, SE Asia and US. He is on the Advisory Board of Wharton's prestigious program for Chief Learning Officers that is run by the Univ of Pennsylvania.

He is an adviser on Social Media usage for SHRM in India. He is among the top ten HR influencers on Social Media according to SHRM, India. You can join him on Twitter at http://twitter.com/abhijitbhaduri. Abhijit is the author of two works of fiction. His most recent book about hiring is called Don?t Hire The Best. His writings have appeared in The Economic Times, the Hindu Business Line, People Matters Magazine, Operations Research & Management Sciences Today. He has been quoted in Knowledge@Wharton and journals like Organizational Dynamics. He also blogs for Times of India.